My current guitar maestro, James Hunley, has a small group of us do exciting/nerve-wracking things like playing at the edge of the Grand Canyon while thousands of people walk by. Many of them stand there and listen. With all those people standing there you don't even think about the big hole behind you. 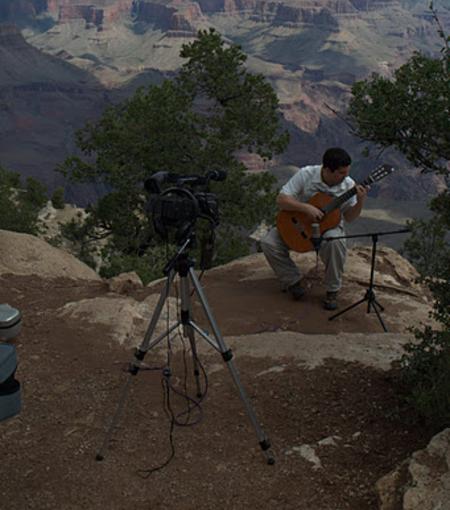 I have this big love in my life and it is called MUSIC.  For most of my life, I can honestly say that music has been second to few things. This does not mean that I am a great musician or have dedicated my life to creating music but I have made a life of LISTENING to music. It really is almost an art in itself. There are actually many good musicians that would be better still if they listened a little more. You cannot just listen to the song within, you must also listen to the songs that surround you. They are everywhere, even in things that do not initially appear MUSICAL.

I grew up listening to a lot of music and I have always had a very special place for the Spanish classical guitar. Due to my Spanish heritage, it is almost a given in my culture that there will be an old, neglected Spanish guitar somewhere in the house.  If I ever mentioned the word "guitar" as a child, someone would almost always say the name "Andrés Segovia" or pull out an old Segovia recording and play it. These old LPs to me were like MAGIC. Like opening an old curio and releasing ancient, wordless messages that were begging for me to listen and interpret. When I was young, it was very common to see guitarists playing on Spanish television stations in the late 1960s and '70s. Tiny little clips in a weekly variety show or in between variety shows as fillers for gaps between programmings. Segovia, Los Romeros, Montoya were all commonly featured but if you blinked you might miss the whole thing. Classical, flamenco or Spanish-Cuban acoustic folk music were commonly featured. Sometimes it was an unknown local artist and those clips were even shorter. Still, just catching a glimpse of these guitarists playing was always a very transporting event for me.

It wasn't long before I discovered non-Spanish players that could play the Spanish classical guitar equally as well and typically with a completely fresh perspective due to their different cultures. The most notable of these non-Spaniards playing classical guitar was Julian Bream. I guess, maybe the fact that he wasn't part of my culture made me listen a little bit more to what he had to say on a guitar. The outsider's view has always intrigued me and his playing really captured my attention. Later on, in the early 1980s, I came across a book in the library called "A Life on the Road". This book followed Mr Bream while touring and then as he made his way back home to England. In this book, I pulled out a man that was dark but full of life and passion. A man that liked a good joke but then sat down and interpreted music that was often based on the more complicated aspects of humanity such as love, hate, depression and the glory of God. I learned how his old 18th-century farm Broad Oak House in Semley, Wiltshire and the nearby Wardour Chapel had been the centre of many of Bream's guitar events, recordings and masterclasses. His old farmhouse has now almost become a travel destination for classical guitarists, though Mr Bream no longer lives there.  Like visiting a castle where the king no longer resides, the energy and spirit still remain. He created this BIG life that many would have enjoyed to be just a tiny sliver of. It was shortly after this period that he released the BBC film ¡Guitarra! A Musical Journey Through Spain as well as the companion LP ¡Guitarra! The Guitar in Spain. I remember wanting the expensive double album and a childhood friend, Raoul, said: "Oh, just bought it, I'll make you a cassette copy". I did eventually buy my own LP copy but due to its portability, I played that cassette for years. I took it with me when I went off to college and I still have it 30 years later. I have long since thrown away 8 tracks and cassettes but this was one of the few that I have kept just because.

Throughout the years I bought more of his LPs and it wasn't long before I came across his recordings of contemporary composers. I must admit, as a young man, I didn't really understand the shift. It was almost like a "cubist" Picasso painting translated to music. I found it foreign. The music appeared somewhat geometrical and asymmetrical to me. The soft fluid lines of Spanish Romanticism were replaced by modern jagged edges. Yet like all that you do not understand but try and decipher out of respect, learning follows. It plants a seed for growth and expansion. You learn that asymmetry can be just as beautiful. I always attribute my love of jazz to Joni Mitchell (the 60's folk-rock musician) because I learned to understand it through her subsequent recordings progressively leaning out of the folk-rock singer-songwriter mould and diving deep into the world of jazz and hybridizations of sounds. I didn't initially fully understand but due to my profound respect for her early works, I continued to listen. These Joni Mitchell jazz-inflected recordings are now amongst my favourites to listen to. I give Mr Bream the same elevated distinction that I give Ms Mitchell. They both went where few had gone before. Converting people from one medium to another, despite people's instinctual resistance to change. Every time I play the 20th Century Guitar or Julian Bream '70s album I hear something I didn't hear before. How amazing that you can still learn from something that you have listened to over 100 times and for over 30 years.

Julian Bream's music could, in some ways, simply be described as a man that had a gift to interpret music with the classical guitar but it likely goes much deeper than that. The greater part of what fueled his art will likely never be fully uncovered within the pages of this site.  This is why I am here sharing what little I truly know about "The ART of Julian Bream".