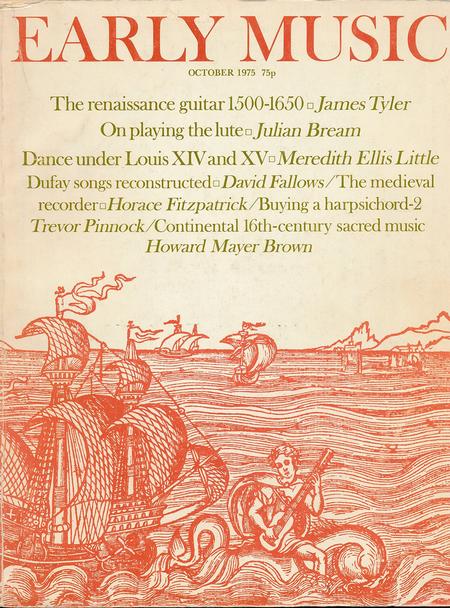 Announcing the new major work in Julian Bream's programmes at the Queen Elizabeth Hall in London.

Discuses the Carey Blyton the new piece written for Julian Bream called The Bream. The composer uses the large freshwater fish in a slow stream as an inspiration for the composition.

Julian Bream back at Cheltenham. Guitar recital at the Town Hall on April 29th. Appleby gave high praise to Julian and even referred to him as "Mr. Magic". The article also mentioned that Bream was on Colour TV on May 19th playing a Prelude by Bach, Homenaje by de Fall and Fandangulillo by Turina. . On May 26th he made another TV appearance playing music by de Visee and Granados. Finally, his 23rd concert tour of America is scheduled for October but before he will perform in Austria, Belgium and Germany 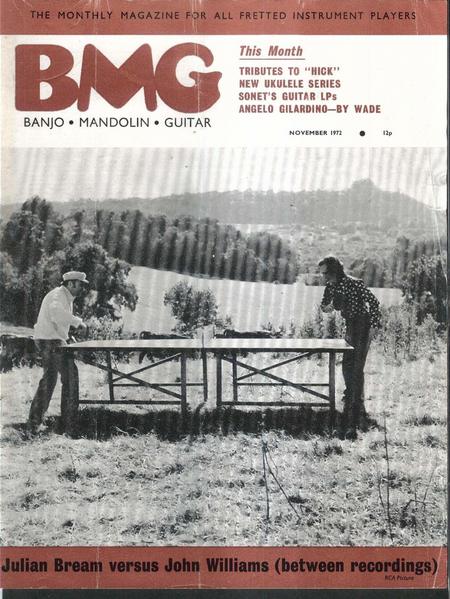 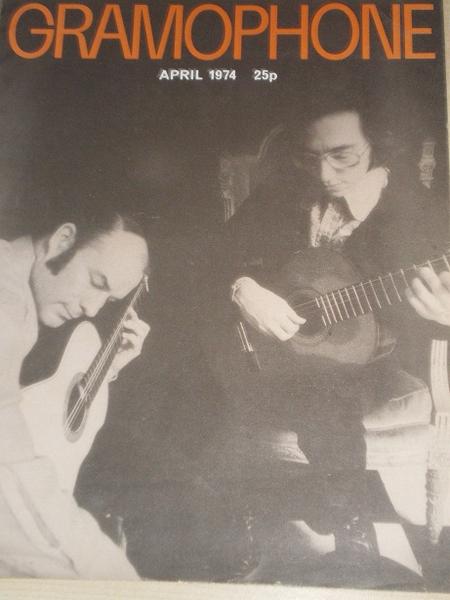 "BREAM DRAWS ON GFA ARCHIVE. One of the primary purposes of the Guitar Foundation of America is to promote interest in the classic guitar through its archive, which provides copies of rare guitar music to the public and to members alike at cost. In the autumn of 1973, Julian Bream came to Cleveland on a concert tour, requested to examine some Giuliani pieces, and spent several hours at the home of the archivist reading through the music. He ultimately asked for and was provided with copies of three Rossinianas of Giuliani (operatic optpourris based on themes of Rossini), including Op. 119 and 121. This fall, a year later, behold! The latest Bream, "Sor Grand Sonata Op. 25, Giuliani Le Rossiniane". It contains considerably edited versions of Giuliani's Op. 119 and 121, superbly recorded, but unfortunately without a word of acknowledgement of the GFA's help in providing copies of the music."

The Soundboard - The Guitar Foundation of America
Guitar Chamber Music, Why? One Amateur's View Point By Matanya Ophee
1976, Volume 3, No. 4, p. 75

"BREAM, JULIAN
RCA ARL 1-1491. Lute Music of John Dowland, 1976.
Bream re-establishes his title as the foremost interpreter
of Dowland on the lute with this bright,
crisp, and clean performance. For fans of Julian
Bream and Elizabethan music, this album is an
essential purchase."

On playing the Lute - Julian Bream in conversation with J.M. Thompson 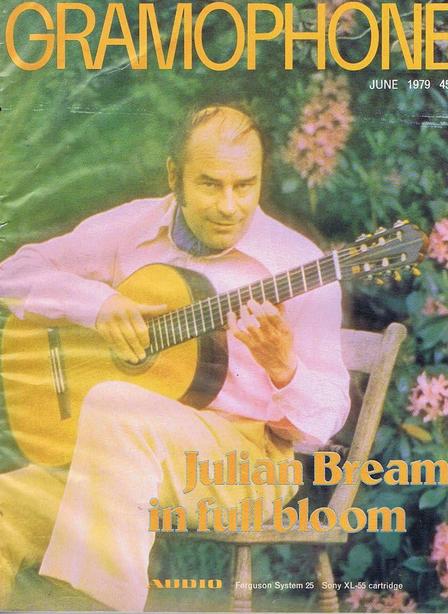 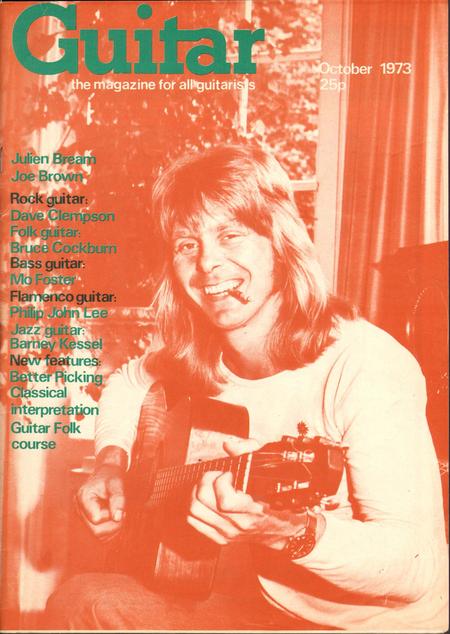 The Soundboard - The Guitar Foundation of America
The Guitar Music of Stephen Dodgson by Richard Provost
February 1979, Volume 6, No. 1, p. 3-4

An article on Stephen Dodgson. Julian Bream is mentioned in reference to the pieces he commissioned and performed.

A short but glowing review of Julian Bream new album Villa Lobos: The Twelve Etudes for Guitar; Suite Populaire Bresilienne.  "until you have heard Julian
Bream perform them on this recording, you probably haven't heard them at their best. Bream plays them with such freshness and control, that one forgets that they have been heard so often. 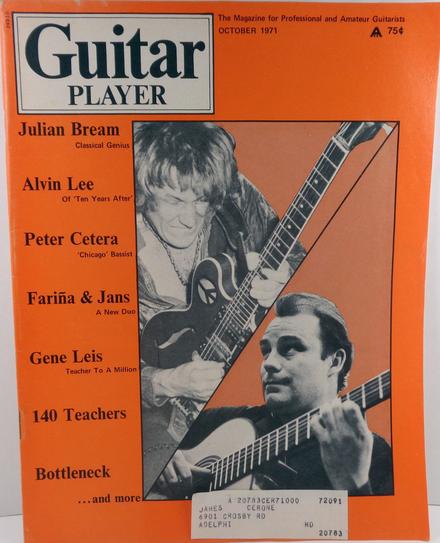 The Soundboard - The Guitar Foundation of America
Guitar Chamber Music, Why? One Amateur's View Point By Matanya Ophee
1976, Volume 3, No. 3, p. 48

"we all went to hear Julian Bream with the Melos Ensemble,
playing the Giuliani Concerto, Op. 30. The program
opened with the Gervais de Peyer, and the celebrated Brahms
Quintet for Clarinet and strings. This was a unique opportunity
for guitar enthusiasts to be exposed to one of the
world's leading exponents of the clarinet, and to a piece
of music that is considered by many to be one of the most
difficult to perform, and at least in this writer's opinion,
one of the greatest compositions of all times.

Review of the Cheltenham Festival at the Town Hall on July 1212th. Julian gained high praise for his performance at the Melos Ensemble's Concert. Aside from Mozart's Divertimento, the rest of his programme was focused on modern composers. Bream Played Bennet's Concerto for Guitar and Chamber Orchestra, Walton's Five Bagatelles and Rawsthorne's Elegy. Elegy "was edited and completed by Julian Bream using Rawsthorne's own material. This work gave the guitarist more scope for displaying the beauty of the instrument rather than the fireworks of which it is capable in his masterly hands. 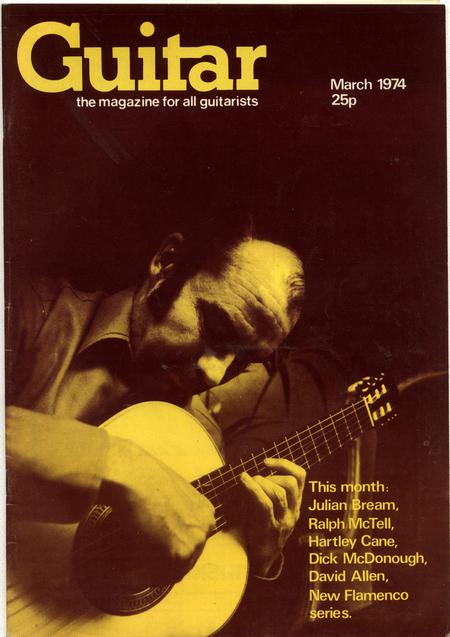 The Soundboard - The Guitar Foundation of America
An Interview With Leo Brouwer by Richard Stover
1975, Volume 2, No. 4, p. 72

When asked whom he admires most among today's
guitarists, Leo replies: "there is one who is an
extraordinary musician: Julian Bream. How he
plays the guitar, in spite of supreme difficulties!
Also Oscar Caceres, a fine musician, and Beethoven
Davezac and Turibio Santos. And to attend a
concert by such a unique and beautiful artist as
Alirio Diaz!" 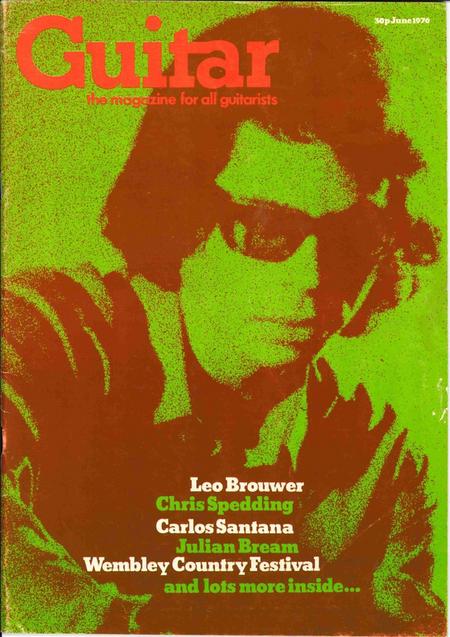 Julian Bream was given high praise for his recital on February 22th at the Queen Elizabeth Hall in London. His guitar solos comprised of a suite of four pieces by Purcell, two Bach Preludes and music by Sor, Weiss, Debussy, Turina (Hommage a Tarrega), Frank Martin, etc. It was also the first performance of the Thomas Wilson piece Soliloquy. Appleby quoted Max Harrison from The Times, "Lasting about ten minutes, this is pleasingly acid and angular, dark-toned but with a noticeably wider range of gesture than the rest of Mr Bream's programme." 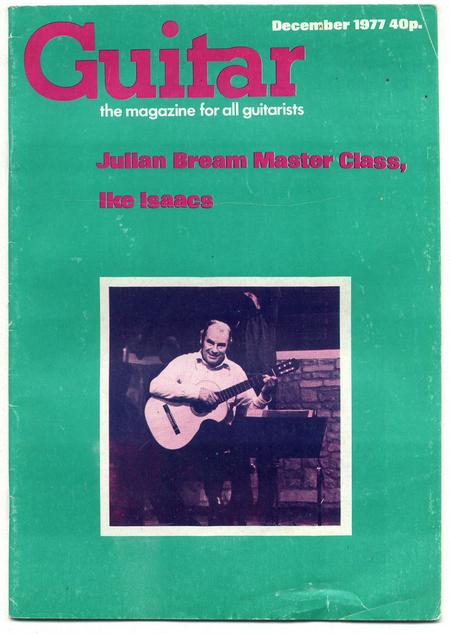 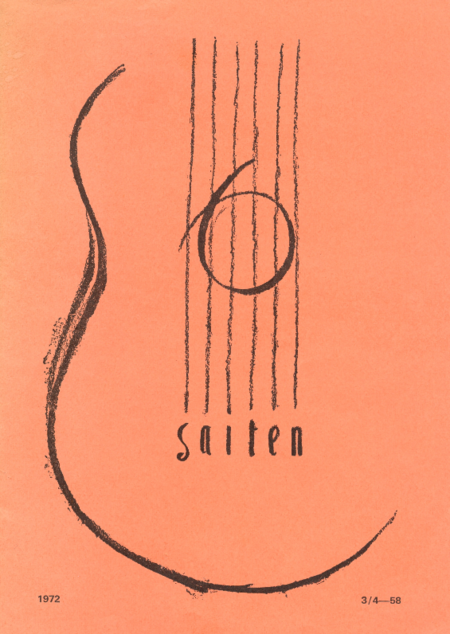 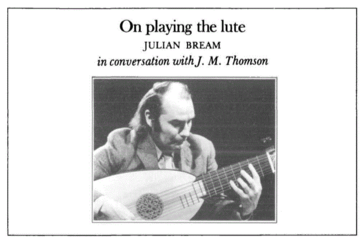 An article about young muscicians and the moment, after a lot of hard work , that they realize that they can really play the intrument. Julian Bream was given as an example of such a moment after he played his first recital.  Such a revelation came to Julian Bream, who, after his successful first recital, at the age of 13 in Cheltenham Art Gallery, said "I didn't know I could play like that!" . Several young performers had such a moment at the June meeting for the Cheltenham Classic Guitar Circle.

Julian Bream gave a recital on June 9th at the Maltings at Snape in Suffolk, the location for the 1970 Aldeburgh Festival. His guitar solos comprised of Berkeley's Sonatina, the first performance of Fricker's Paseo, two Bach preludes, , Schubert's Menuetto from the Sonata in G Major, Gerhard's Fantasia, de Falla's Homenaje and Miller's Dance.  He played a Villa-Lobos' etude for an encore. The author mentioned that while Bream was reading the printed score on the stand for the first performance of the Paseo. his facility seemed quite unhampered, producing with ease the large range of "guitaristics" demanded by the composer: sombre chords; fast scalic passages; harmonics and a wide usage of the fingerboard and even a rather alarming "broken string" sound effect.

Julian Bream at the Queen Elizabeth Hall with Andre Previn on piano and Melos Ensemble.

The Soundboard - The Guitar Foundation of America
The Guitar In Canada: Juris Poruks by Jim Forrest
August 1979, Volume 6, No. 3, p. 85 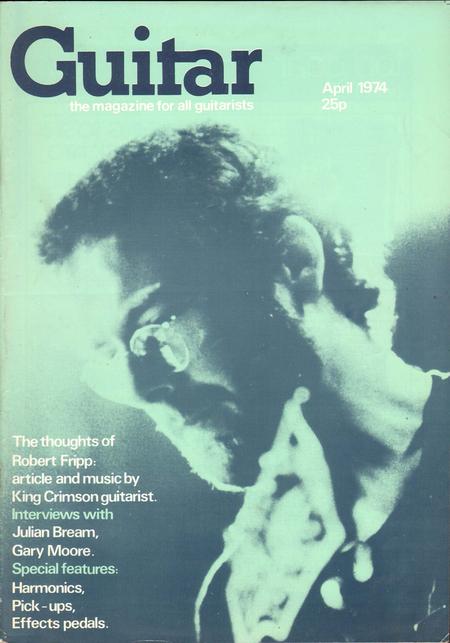 The Guitar Foundation of America

The Guitar Foundation of America has entered negotiations with the non-profit Guitar Workshop of New York to publish facsimiles of the first editions of Mauro Giuliani's Rossiniane, Op. 119, 120, 121, sources which Julian Bream used in his recent reco77177 (R67 Red Seal, ARL 1-0711). Plans call for the publication also of a chamber music series with guitar, the first number of which will be an edition
by Peter Danner of a Nocturne by Carulli (V1. & G.). Please send the Archivist your proposals for other works to be included in these series.

FROM THE CHAIRMAN
A Message from Frederick Noad, Chairman, Board of Directors.

Noad is reaching out to members for donations to a scholarship fund. He used the PSG as an example and how successful they were in getting the classical guitar community to supporting the young Julian Bream when he was in finacial need.

THE DEVIL'S ADVOCATE by George Warren

The article deals with the issues that have surrounded the classical guitar since Segovia struggled to lift it out of the hands of the flamenco and jazz guitarist back in the early 1920s. The author makes a claim that the classical guitar has achieved its elevated stature among classical instruments at this point and it is no longer necessary to keep these strict boundaries around the instrument. Most professional classical guitarist plays around with popular music privately or at parties and will even play classical arrangments of pop song for an encore. The article brings back the days when Wilfrid Appleby was so aggressively against anything being called a guitar aside form the Spanish classical guitar. The article states that Appleby was selective on who he banned from appearing in the pages of his now-defunct Guitar News. He refused to acknowledge Laurindo Almeida yet continued to support Julian Bream yet they both played classical guitar and liked to play jazz as well. Finally, the article referred to Appleby as the late Wilfred Appleby when he was still very much alive and well for a man in his 80s. The mistake was corrected in the following issue. Appleby's wife sent a letter to the editor requesting a correction and included a recent picture taken on their day of anniversary.

The author continues her discussion on her part 3 of Guitar Chamber Music.  In discussing  Boccherini Quintet in e minor, Ophee discusses the guitar and its problems with volume amongst a group of louder instrument. She mentions Julian Bream and describes his solutions when playing the piece and how he may change what is written in order for the guitar to remain audible.

The Soundboard - The Guitar Foundation of America
CURRENT DISCOGRAPHY Compiled by John W. Tanno
May 1979, Volume 6, No. 2, p. 48

A short but glowing review of the new album Julian Bream and John Williams LIVE. " The performances represent the highwater for duo guitarists, and set a modern
standard to which all contemporary duos must aspire." You "will want to add this album to your collection as the finest portrayal of the sound of two guitars".

The Soundboard - The Guitar Foundation of America
Conversation with Julian Bream by John Wager-Schneider
February 1980, Volume 7, No. 1, p. 9

John interviewed Bream at the KPFK-FM studios in Los Angeles in November 1979.

Julian Bream is asked about

- having two completely different programmes for each tour to avoid muscle memory and increase the focus on the music.

- Taking 3 months off in the summer to prepare for the next season.

- Revisiting certain pieces after 3 or 4 years of not playing them.

- Being desperate for money in 1947-1948 and actually taking a few dance band jobs for the BBC radio. Having to borrow the plectrum guitar and pick.

- Dowland was likely a virtuoso on the lute.

-Disbanding the Consort after 5 years.

- Discuss commissions throughout the 1970's, Mainly the Royal Winter Music

- Guitarist now starting to play Britten's Nocturnal after a long period where only Bream would play it.

- Discussed the succes of the LiVE album with John Williams. Future touring not likely because Williams hates to travel.

-Reviving the Consort in a more authentic manner

The Soundboard - The Guitar Foundation of America
RECONSTRUCTING THE ROSSINIANE OF GUILIANI/BREAM
A FEATURE RECORD REVIEW by Thomas F. Heck

A very extensive analysis on how Bream took liberties by making cuts and substitutions in the arrangements of the original editions to create a final interpretation that makes "the total
experience as meaningful as possible both to the performers and to the audience".

Thomas Heck of the GFA provided Bream with the original editions. Heck invited Bream to his home to look through the music. Bream preceded to played through the music for hours at the author's home before asking for a copy. This article is a must if interested in knowing in detail how Bream pieced together what finally ended up on the recording.