VIEWING OPTIONS
For a larger view of the work on a dark background, please click on the name of the work in bold under the picture.

Some personal reflections from Michael Taylor:

"What a loss his passing is. Even though I am not a musician, watching his master classes on BBC 2 changed my whole approach to my painting. I found his passionate rigour, his refusal to let anything go without wringing it dry of expressive possibility (even at the risk of it all falling apart) and the way he could turn each note or phrase into a unique sonic event completely inspiring.
Having the good fortune to win the NPG Portrait award, part of the prize was a commission to paint someone for the gallery collection, and even though they gave me a list of 'wanted' sitters, I immediately suggested Bream as someone I would love to tackle, and I was so pleased they agreed. I was very young and inexperienced, but he made the sittings a pleasurable experience at his lovely house in Semley and was very gracious about the result. He was not always easy to pin down, however, and would try to wriggle out of sittings with early morning phone calls like, "Ah, hello, it's Julian here. Look, I've just seen the weather forecast and there's an occluded front on the way, so I don't think the light'll be up to much, perhaps we'd better postpone..." which I read as 'I've had a very good invitation to lunch' or 'there's a cricket match on I'd rather see' but I always ignored it and turned up anyway!"

Mr. Taylor, later on, reflected on an even earlier part of his portraiture of Bream:

"Early in our sittings, while driving his vintage MG sports car through the narrow Dorset lanes Julian hit a bridge which very nearly severed his right arm at the elbow. After extensive surgery, and at the height of his concert career, he had to learn to play all over again. He also gamely resumed the sittings, albeit interrupted by visits from the physiotherapist. Never one to hang around, he booked his favourite concert venue for six months away, had programmes (which he asked my wife Caroline to design) and tickets printed and began practising and mastering a new right-hand technique (“It needed working on anyway”). The gig, to which we went, was a triumph of sheer artistry, courage and determination, and a testament to a passionate and inspirational artist. "

In discussing the portrait with Mr. Taylor, I asked him specific questions about the room, the pose and the Grammy award. Was it a prop or was it already there? I also asked if Bream had tried to change the direction of the work before or while it was in progress.

The portrait is set in the study he used for practice ('the crotchet factory') during preparation work for a tour of the States, so there were a lot of scales and repeated phrases going on while I worked out the composition. I had attended some concerts not long before we began, and had been struck by those moments in the performance when he would look up and gaze straight through you with an inward, focussed look; almost pained, but very still, so I knew I wanted that right from the beginning. It was my starting point. We agreed on a chord that was interesting for him and looked balanced to me and took it from there. After his accident, the whole approach was necessarily a bit changed, but I find people open up a bit at times of crisis, so in a way, it may have deepened the feeling in the finished painting.

Julian was incredibly amenable to being bossed around, and after getting him to rummage around in the dressing up box for a bit we quickly agreed on an outfit that suited us both, and then apart from letting me know if anything didn't feel right he pretty much did as I asked. He didn't try to influence the composition at all, for which I was grateful and which incidentally I didn’t let him see until nearly complete. The Grammy award on the shelf behind him was serendipitous, it was just there, so got included because I think he was rather proud of some of his awards, but also I was amused by the slightly strange relationship of the horn to his ear!

Member of the Royal Society of Portrait Painters

(the bold, underlined name is a link to a larger portrait view)

Bream on Taylor's painting:
"When he had finished the painting, I was very pleased with what he had done. What I admired about him was that he was very sure of himself ... his sense of composition was good, and I also liked his sense of colour". Julian Bream


Sir Alec Guiness impression of Bream's portrait:
"The most striking portrait, for my money, is Michael Taylor's oil of Julian Bream. For ten minutes I sat and gazed at it and felt I knew Bream. What surprised me was the rather formidable, almost morose, look in the eye..... There is in that portrait something different....." 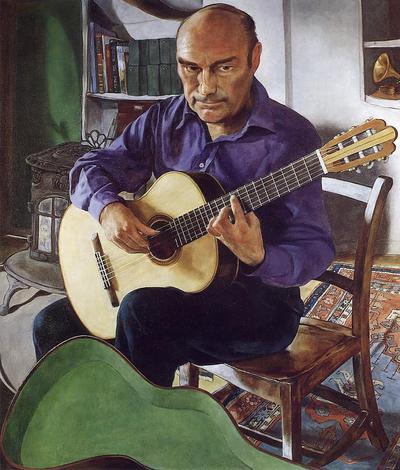 Webmaster's note:
Thank you to Michael Taylor and the National Portrait Gallery for allowing JulianBreamGuitar.com to display this special portrait of the classical guitar legend, Julian Bream.

The guitar featured in Michael Taylor's portraiture of Julian Bream was constructed in 1981 by José Romanillos, No. 592 "La Lechuza". "La Lechuza" is Spanish for "the owl". Romanillos named the guitar after something that symbolizes wisdom.

After finishing the pages on this site dedicated to Michael Taylor's portrait of Julian Bream, Michael wrote me again with a curious observation made by guitarist Andrea De Vitis:

"Incidentally, Andrea De Vitis tells me the chord Julian is holding is 'C 7th with the F pedal on the bass (or, from a different harmonic perspective: F with 4th and 7th). In both cases, it is a dynamic and dissonant chord, something that needs a resolution.' .....dissonant and needs a resolution. I rather like that!"