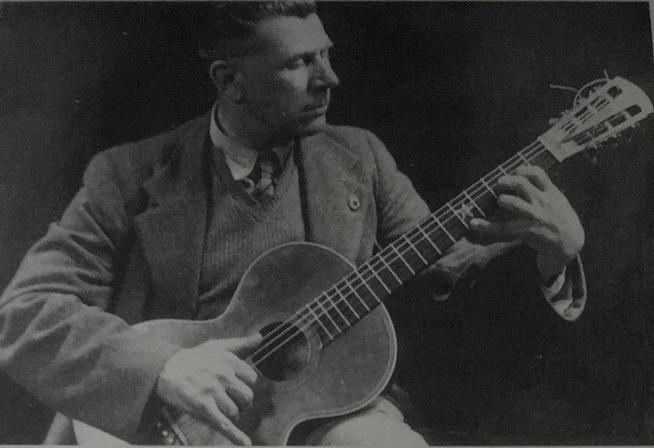 Henry started to show a significant interest in the Spanish classical guitar and its music after having read Wilfred Appleby’s letter in the January issue of the BMG magazine about a “Spanish Guitar holiday” at a friend’s house. Julian's father’s interest in the classical guitar did not go unnoticed by his son and soon he too became interested in the music. [21]

Henry and Julian read a notice on the March edition of BMG magazine, a periodical for banjoists, mandolinists and guitarists. London Philharmonic Society for Guitarists (PSG) will be resuming its activities after being temporarily inactive during the war. The first meeting will be on April 21. [23]

The London Philharmonic Society for Guitarist (PSG) resumes its meeting after the war and Julian and his father start attending the meetings. Julian is asked to play the first time he attends and his first public performance at the meeting was very well received among the members. Julian played the "Study in B minor" by Fernando Sor. The president of the society, Dr Boris Perott, offers to start teaching him. [24]

June 23
Julian plays at the following PSG meeting. He performs "Salut d' Amour" by Elgar, arranged by Obregon, "Danse Nord" by Giuliani and "Andante" by Diabelli. Henry volunteers to be the librarian for the PSG. [25]

July
Julian's picture is published for the first time within the pages of a magazine dedicated to fretted instruments - the B.M.G. (Banjo Mandolin Guitar) magazine. A small paragraph mentions his acclaimed technical accomplishments at the age of 11. It states that he also plays the plectrum and Hawaiian guitar. [26]


July 21
Henry is officially appointed the librarian for the PSG. This ensures that Julian will have the greatest availability of tutorial texts and scores. [28]

Henry writes Wilfrid Appleby for the first time. As the librarian for the PSG, he submitted monthly reports to Appleby (editor of the PSG's Bulletin). [30]

Mr Appleby makes his first suggestion that Henry should consider allowing Julian to perform at a "trial" recital. A controlled event that should end up as a positive experience for Julian. [35]

October 15
After Mr Appleby's insistence that Julian should play a recital, Henry develops a programme for Julian's first "trial" recital at Cheltenham Public Library, Art Gallery and Museum. The recital was to take place in January 1946. Due to Dr Perott's opposition and insistence that Julian was not ready, the plans for the recital were cancelled. Dr Perott at this time promised that the PSG would arrange a recital for Julian next October (1946). This plan for a recital never materialized. [38]

Ries de Hilster composes and then dedicates Prélude to Julian Bream. Julian was supposed to have performed the piece on his first ‘trial” recital that was cancelled. The piece does not appear to have made it to any future recital programs after this time. There is no evidence that Julian ever performed this piece in public.[39]

1946
January 5
PSG holds its annual general meeting at Alliance Hall in Westminster. Wilfrid M. Appleby, a writer for the BMG, attends his first PSG meeting. Appleby had just started a regular column that month devoted to the Spanish Classical Guitar. Julian performed "Preludium" by Giuliani, "Rondoletto" by Darr and "Calme du Soir, Op. 58" by Shand. Appleby announces to the members that Julian is the "brightest hope for the classical guitar in England". Appleby privately admonished Henry for allowing Dr Perott to teach Julian his archaic pedagogical approach in addition to allowing him to suggest that Julian should consider playing the guitar with extra bass strings. [41]

May 8
Julian requested to have a recital at Cheltenham after it was obvious that Dr Perott was not going to fulfil his promise and arrange a recital for October (1946). [45]

Around this time Henry starts deciding what would be the most appropriate name for Julian as a professional musician. Until now he had often been referred to as "Alex Julian" although his birth name was actually Julian Alexander. Mr Appleby agreed with Henry that a simple "Julian Bream" would be best, despite Dr Perott's insistence that they make up an exotic foreign name for the young musician. [46]

Henry terminates Julian's lessons with Dr Perott. Henry and Mr Appleby felt that while efforts in teaching Julian discipline towards his instrument was appreciated, he was teaching an outdated method compared to the teachings of the Spanish classical guitarists such as Tárrega, Llobet and Segovia. [47]

August
Julian starts his guitar lessons with Desmond Dupré. His studies are based on Pascual Roch's Tutor material (Roch was a student of Tárrega). [53]


Terry Usher composes "Sonata in A" upon Henry Bream's request. The sonata was written and dedicated to Julian Bream. Julian would keep the Usher sonata in his repertoire for almost 20 years. [54]

September
Henry is notified that Julian will be allowed to study the cello at the Royal College of Music along with the piano. Julian initiates his study with the cello. [58]

October
Dr Perott had promised last October to set up a recital for Julian this October but the event was never arranged. [59]

October 19
Julian performs at the PSG meeting and plays the Maccaferri guitar in public for the first time. The use of a guitar with added bass strings was upsetting to Appleby who supported only the traditional six-stringed classical instruments. [60]

October 20
The British Federation of BMG Junior Trophy Rally is held at Central Hall in Westminster. Julian does not compete due to his young age but performs as a "special" item at the end. He performs "Rondoletto" by Darr. The audience was so taken by the performance they applauded for numerous encores.  Julian played a study and prelude by Carcassi. While the audience applauded for more, Julian bowed and left the stage after the second encore. Julian signs autographs for the first time. There may not have been a "trophy" involved for Julian but the event represented a high honour for the performer. [61]

November
Henry developed a programme for Julian to perform on November 30.  This is the second attempt to have his first "trial" recital at Cheltenham Public Library, Art Gallery and Museum. The initial attempt for the "trial" recital having been last January. The November 30 recital was delayed yet another week till December 7 so the recital could be held in the Chinese Porcelain Room at the Cheltenham Art Gallery. [66]

December
The December issue of BMG is published with a summary and stunning review by Wilfred Appleby. The article focuses on Julian’s performance at the British Federation of BMG Junior Trophy Rally. Towards the end of the article, a plea is made toward the readership to help in the quest to provide the young Julian with a first-rate modern concert guitar.  [67]

Julian and Henry meet Reginald Smith Brindle at the PSG meeting. He agrees to compose something for Julian to play. [68]

December 7
Julian finally plays his "trial" recital at Cheltenham Public Library, Art Gallery and Museum in the Chinese Porcelain Room. He plays with an adult-sized Salvador Ibáñez classical guitar owned by W. Appleby. The event is essentially a private concert. [70]  A few months later in 1947, this trial concert is reviewed by the prestigious New York magazine, Guitar Review. This is the first time that Julian Bream is mentioned in an American publication. [71]

1947
January 7
Julian plays his first radio show for the BBC called the Children's Hour for Young Artists. He played Turina's "Fandanguillo", Carcassi's "Prelude" and Schumann's "Romanza". He was paid one guinea and was sent a congratulatory mail-bag which confirmed the popularity of his appearance on the show. [77]  He played the Maccaferri guitar (additional unfretted string guitar) which gave Appleby displeasure when he tuned in to hear the broadcast. [78]

Julian's first formal public recital held at the Cheltenham Art Gallery was a success. He was 13 years old. Julian plays his smaller sized Salvador Ibáñez classical guitar given to him when he was 11 years old. This recital is considered his official debut and the beginning of his professional career. [81]

June
Julian is featured in the June issue of the BMG magazine. The issue included a summary of Julian's accomplishments along with a photo on the cover. [84]

Henry exchanged the Maccaferri guitar for a Spanish-style classical guitar made by the Italian Giuseppe Calace of Naples. [85]

August
Henry Bream finds a Ramirez guitar in very poor condition but he decides to buy it and restore it. It ends up sounding very good once repaired. [87]
This becomes the first guitar that Julian strung up with Augustine nylon strings; strings that Henry had bought from Perott back in May and were very difficult to acquire and expensive to buy. Julian would only use these strings for performance, washing them and hanging them up to dry until his next concert. [88]

September
Wilfred Appleby, Terry Usher, A. P. Sharpe and Henry Bream meet to discuss the formation of a trust for Julian to advance his musical career with the classical guitar. They also considered having Julian taught by the celebrated Austrian guitarist, Luise Walker. This meeting was in response to the lack of commitment from Dr Perott and the PSG to aid Julian financially. [62]

The tentative date for a debut recital at the Wigmore Hall in October. The event was supposed to be arranged by Dr Perott and the PSG committee but once again they fail to come through with the recital arrangements. [93]

December
Henry formulated a programme for Julian to play at his second recital in Cheltenham on January 5. The programme highlights 3 British composers as the centrepiece of the recital. [95]   need to move numbers [100]

Terry Usher composed two new pieces at Henry’s request, Impromptu, Op.2, No.1 and Minuet, Op.2, No.2. Both are dedicated to Julian and the Impromptu is included in the recital scheduled on January 5 at Cheltenham. Both pieces were published by Scotts’ in April 1948. [101]

January 5
The second formal public recital at Cheltenham Art Gallery was a success. Julian plays a George Panormo guitar from 1856. The Ramirez guitar Julian had been using had a full, robust sound but it was not playing dependably beyond the 12th fret making Julian apprehensive to play the higher notes. The Panormo was also a smaller scale length so easier for a 14 year-old boy to play. This is the first guitar known to be bought by Julian, not his father Henry. He made the decision to buy it and paid for it himself. [103]

March 3
PSG Annual General Meeting. Perott has decided that it is time to discuss Julian’s future and establishing financial support in the form of a trust. Also, Julian’s London debut was discussed. Perott had shown reluctance to have the PSG show definitive support for Julian until now. Not only did he not address the possibility of raising money to aid in Julian’s musical education with the guitar but he had also failed to schedule Julian’s London recital in the past, despite promising to do so twice before. [107]

May-June
The Julian Bream Fund was announced in the bulletin for PSG and the BMG magazine. [112]

July 17
PSG arranged Julian’s first London debut at Alliance Hall. Henry would have preferred the prestigious Wigmore Hall. The stage at the Alliance Hall was very low and Julian had to sit and play on top of a table that was just wide enough for his chair and footstool. Julian was accompanied once again by Reginald Evans on the piano for the Shand concerto. A couple of days prior, Julian had bruised his thumb playing cricket but insisted that the concert did not have to be cancelled. Due to non-profit status, they were not permitted to sell tickets. A silver collection organized by Dr Perott only raised a small amount of money. [114]