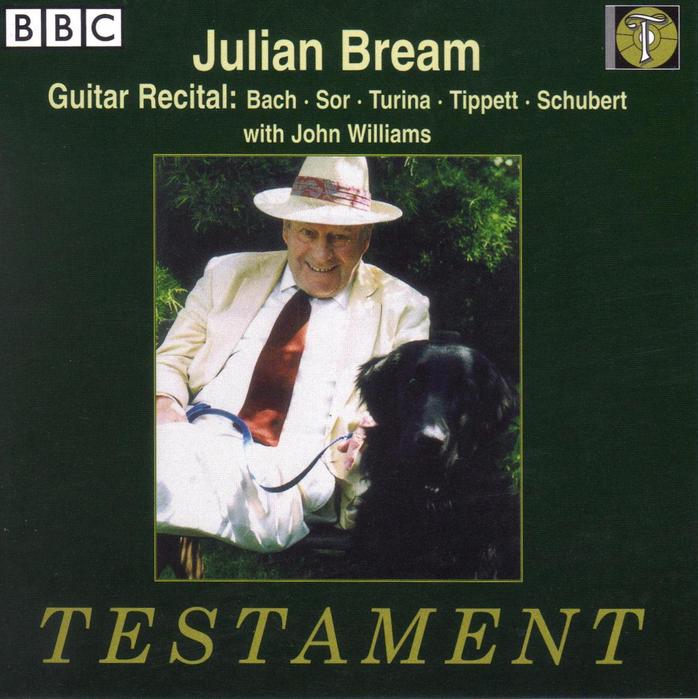 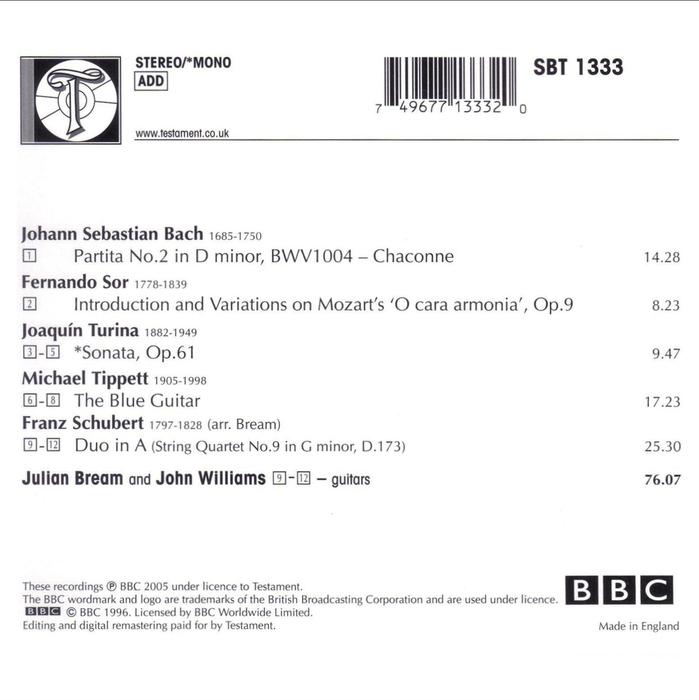 The Fernando Sor piece was recorded at the Queen's Hall, Edinburgh.

All other pieces were recorded at BBC studios.

Both the Tippett and the Schubert performances were the first broadcast of those works.

The booklet contains an interview with Julian Bream. It appears Mr. Bream himself went through the archives at the BBC and selected the performances for this CD album compilation.

Bach: He discusses the difference between recording the Chaconne at the beginning of his career for Westminster and at the end for EMI. This recording was recorded in the middle of that period and he thinks it is amazing to hear that his interpretation in the '90s was so similar to his recording in the '50s and '70s, just more mature.

The Chaconne was recorded on both "A Bach Recital for the Guitar" for Westminster in 1957 and on "J.S. Bach" for EMI Classics in 1994.

Sor: He feels this piece is one of the best Sor has ever written. He states "Everything is perfect, nothing in excess. Very Mozartian. I love it."

Turina: In performing the Joaquín Turina in 1956, he mentioned that he was a very impetuous performer when he was young and he thought that was somewhat refreshing. He feels like he has now lost that to some degree.

This piece by Turina was never officially released in any recording by Julian Bream until now. It was incorrectly listed on the track listing of side 2 of Spanish Guitar Music from 1956 but not actually mentioned in the liner notes below or included on the actual vinyl.

Tippett: He mentions that the only reason he never recorded the Tippett pieces was that RCA was going through internal changes at the time and they didn't think recording a contemporary piece was something they wanted to release.

This piece by Tippett was never officially released in any recording by Julian Bream until now.

Schubert: He discusses having thought about arranging the Schubert for two guitars after he heard a quartet perform it. He sat on the idea for over a decade and then he decided to do it for his 50th birthday concert at Wigmore Hall.  He got John Williams to agree to make an appearance at the concert and then he thought he needed something special for the occasion. He immediately thought the Schubert would be perfect. He had no free time so he arranged the whole thing on a flight to Australia and finished it on the return flight!

This piece by Schubert was never officially released in any recording by Julian Bream until now.

***Note: the word Testament is the name of the record label and it is not officially part of the title of the release. Still, it is displayed on the front cover with lettering far larger than all the rest and it basically dominates the majority of the front cover. This has led to many referring to this recording as "Testament".