The last Sunday in June proved a guitarist's gala night at the "Spanish Cellar Club." Dorita & Pepe, arriving to entertain guests, found themselves entertained to half an hour of flamenco music by guitarists Peter Duffie and Michael Elliott. Later three more guitarists arrived - all having a "night off." It was not long before Julian Bream, Alexis Chcsnakov and Roland Harker added to the evening's entertainment. Roland Harker played the tremolo theme from Vinas' "Fantasia-Capriccio" included in this month's music supplement; Alexis Chesnakov sang and played two breathtaking Russian songs; and Julian Bream contributed a beautifully played Villa-Lobos study.

Early in July Julian Bream was involved in a car accident near Newmarket. His car was badly damaged and the injuries Julian received necessitated him spending several days in Newmarket hospital. We hear that his injuries were not of a serious nature and he was discharged from hospital on July 9th. 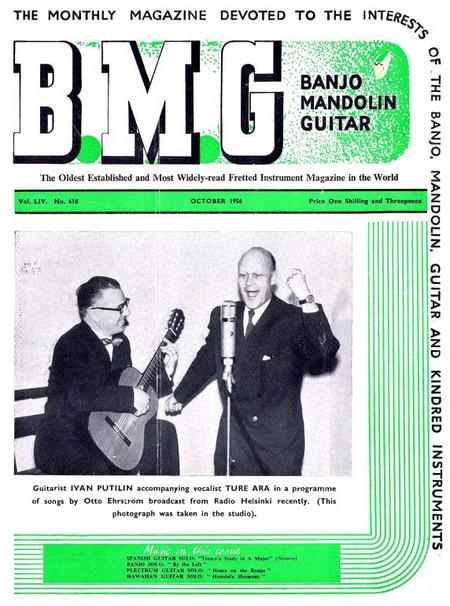 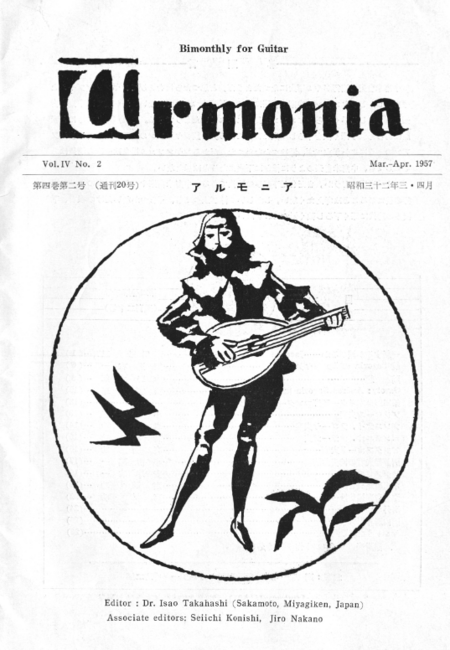 Mr Usher states in a reply to correspondence that aside from Segovia, Gomez and Oyanguren, no other classical guitarist can make a living playing in Europe. In Britain there are only "TWO concert soloists: Julian Bream and John Williams (the latter not yet fully launched on his professional career). In my view there is little room for the professional classical soloist even in these days of guitar boom."

"What I said ten years ago still goes: anyone who becomes a classical guitar solo recitalist and who is not a genius is a misguided individual-he will never do more than scratch a living and that probably through teaching and accompanying." 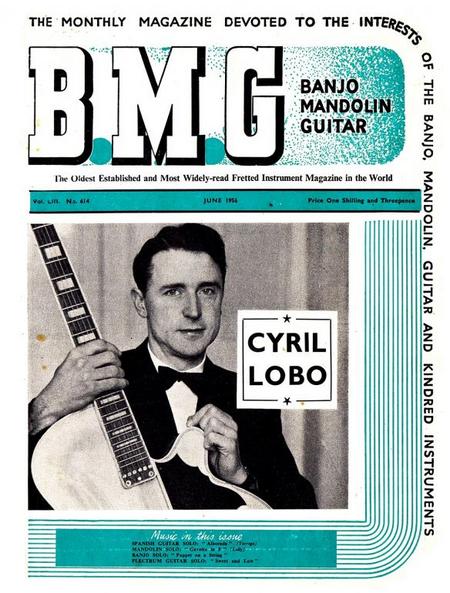 Julian Bream participated in the Apollo Recital of Music and Poetry at the Royal Festival Hall on February 12th. The Reader were C. Day Lewis and Jill Balcon. Julian also performed lute and guitar solos.

Julian Bream is included in the list of Artists and Teachers at the Summer School of Music at Darlington Hall, Devon, August 4th to September lst. 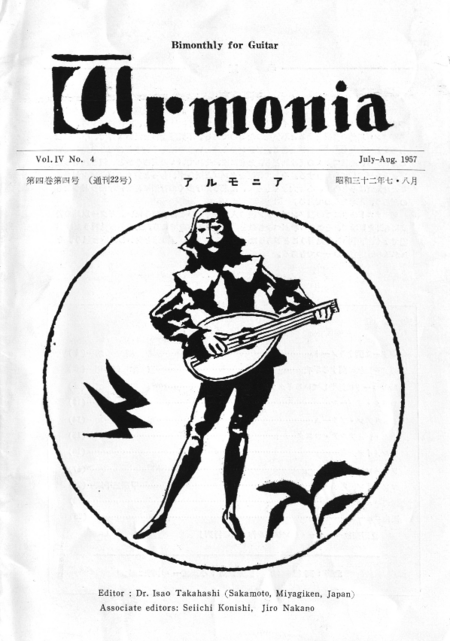 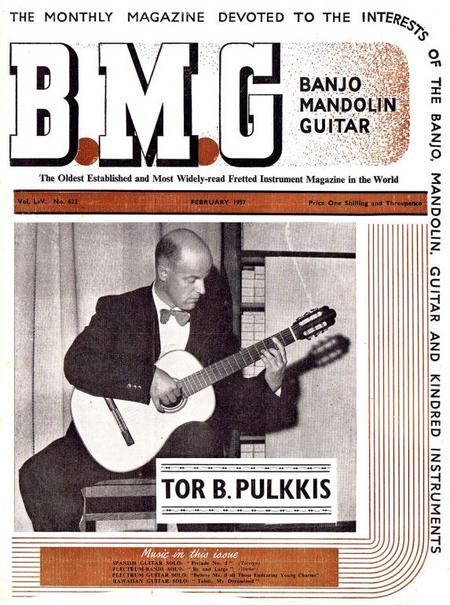 The August Concert at Alliance Hall had numerous performances of different styles of music. Among the classical performers was Hector Quine, a friend an guitar student of Julian Bream. Julian Bream was seen in the audience.

"Julian Bream has been busy giving concerts with Peter Pears. Next month he is
due to visit Tunbridge Wells (4th), Kendal (7th), Middlesbrough (8th), Newcastle
(9th) and Newbury (16th)." 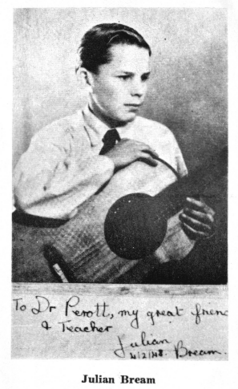 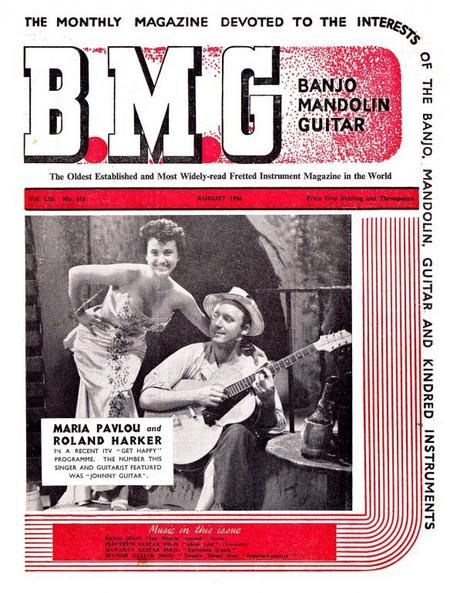 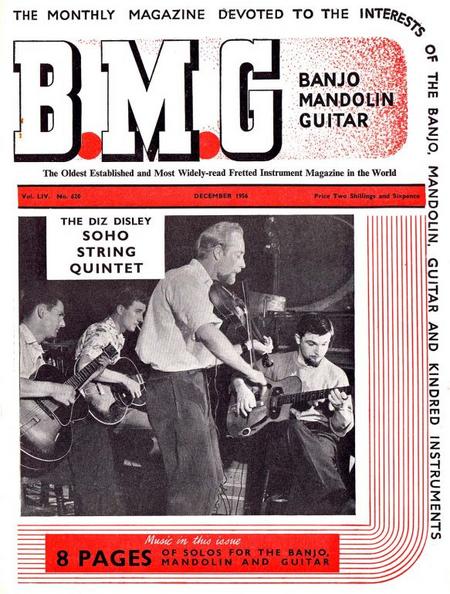 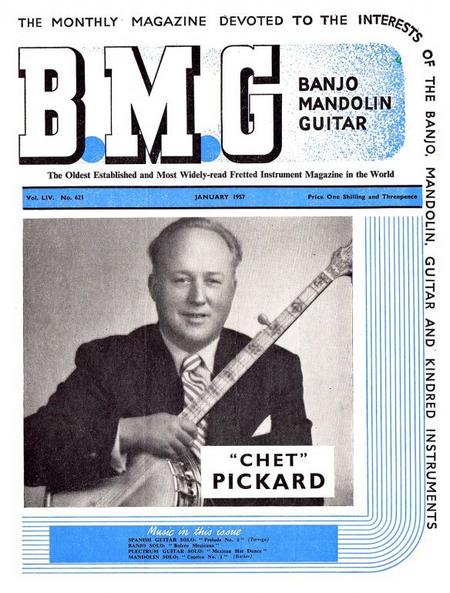 -A Bach Recital for the Guitar.

"Until now, it was thought that there was no other than Segovia when it came to playing guitar."

A short paragraph about Dr Perot that talks about his medical career his passion for the guitar and his star pupil Julian Bream. It also mentions that Perott has recently passed from coronary disease and was never able to write his autobiography that he wanted to title "The Price of Happiness". A picture is included dedicated to Isao Takahashi.

"Julian Bream's New York debut seems to have been a huge success. He seems to have come all the way to listen to it from a distance of 200 miles, but he praises it with excellent musicians such as World Telegram (newspaper) in New York. So, in March, he planned to go to the United States for the second time, and had seven stages until March 9th, New York, starting from February 24th, Canada and Toronto." 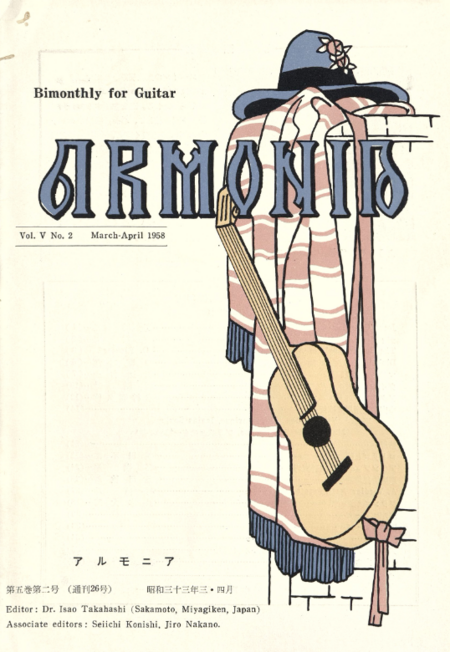 Julian Bream is exceedingly busy these day. His playing of the guitar and lute are often heard on 1he radio and he also manages to give recitals in various parts of the country.  One particular recital recently brought him exceptional praise from the press - when he appeared at the Queen's Hall, Nottingham, with Carmen Prietto (soprano). Accompanied by Julian Bream on guitar, Carmen Prietto sang songs by Granados, Falla, Nin and Obradors, and a group of Mexican folk songs. Mr. Brcam's solo contributions to the programme included works by Sor, Malats, Villa-Lobos, Tárrega, etc. 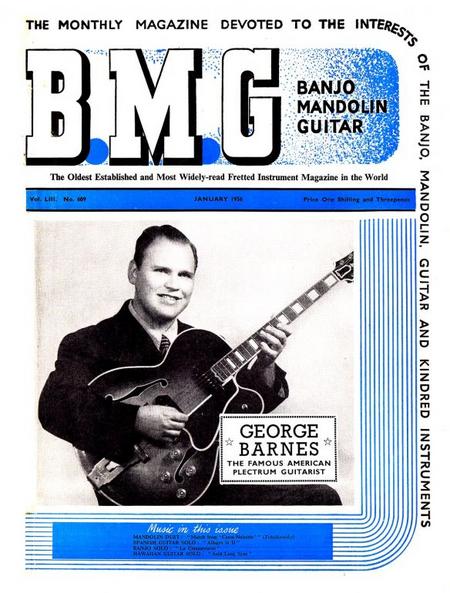 The article is a biography of Julian Bream. It starts off with a correction by Dr Boris Perott in reference to the prior issue of Armonia that stated that Julian Bream was a disciple of Andres Segovia. He made it clear that Julian Bream was NOT although he did have some limited exposure to the maestro when he was a child. The magazine apologized for the misstatement and used the opportunity to introduce Julian Bream to the Japanese readership especially since Bream had just started recording with Westminster and was struggling to have the LP released in Japan. They discussed childhood and his different guitar teachers (father, Perott, Dupré) and his performance for Segovia. His enrolment in Royal School of Music, his playing on Sarabande for Dead Lovers and his Wigmore debut. While he might have started with instruments such as the Macafferi guitar, he now currently plays a Martin and a Hauser and a Quine

"Britain is said to be a country where guitar music does not grow up, and it is a fact that there was a statement close to the sadness of the guitar." While there were great lute composers in Britain, guitar-like music stagnated in the following eras despite progressing in other major European cities. "That was the conventional wisdom. It was Julian Prime who brilliantly broke that conventional wisdom."

A short note that mentions that Julian Bream's popularity is not limited to the BMG magazine. His exposure is increasing (the translation on Google translate is awkward and difficult to understand).

This page is dedicated to the magazine articles that have been published in reference to Julian Bream from 1956 to 1959. By the year 1950, Julian was nearing adulthood. While relatively well known in music circles in England, he was far from an established international guitarist. The BMG magazine continues to be instrumental in establishing and maintaining Bream's popularity as a guitar player during his period as a young man as well as the publication dedicated exclusively to the Spanish classical guitar. Julian Bream start appearing more frequently in other publications throughout the world. 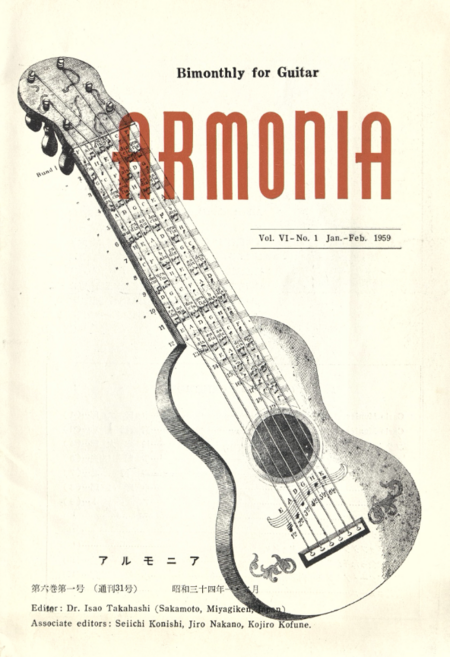 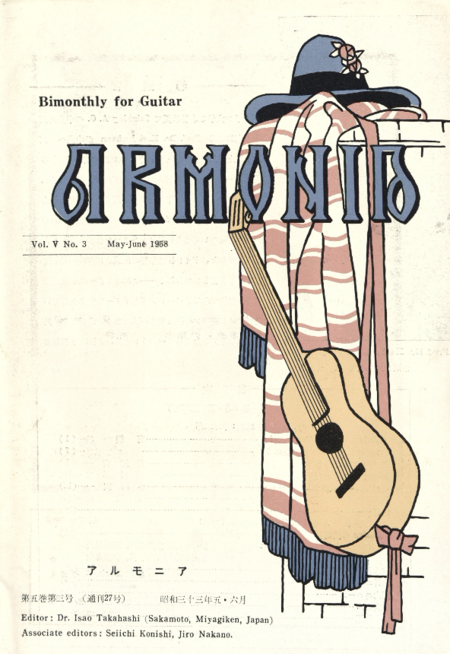 Julian Bream is scheduled to play the Concierto de Aranjuez with the Royal Philharmonic Orchestra conducted by Sir Thomas Beecham at the Royal Festival Hall in London on February 9th.

The article discusses how Bream's recitals are bringing the classical guitar to areas all over England where it was previously unknown. Bream recently played in York. He played a group of lute solos and then pieces for solo guitar. He then accompanied singer Eileen McLoughlin on three Tonadillas by Granados and Villa-Lobos "Cantinela" (Bachianas Brasileiras No. 5). The concert was reported to be a great success. He also appeared in Nottingham at the Queen's Hall with soprano Carmen Prietto. The secretary of the institution, Mr Geoffrey T. Boyle, writes: -"His performance and personality impressed themselves on the audience to a remarkable degree. In the guitar solos, he was superb, while his accompaniments to Carmen Prietto's singing brought forth such comments as "What a perfectly matched pair!" "How can such mutual understanding arise from such limited rehearsal time".

Mentioned that several guitarist hade been playing Edinburgh. Segovia recently played Edinburgh twice and both were broadcast on radio or television. Julian Bream Appeared with singer Eileen Mcloughlin as well as performed solo. 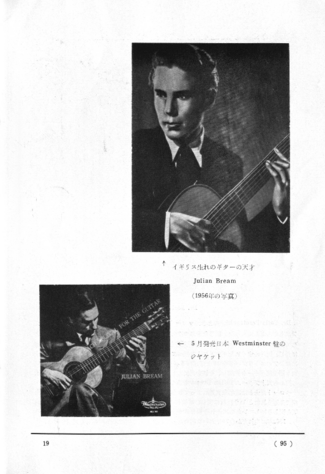 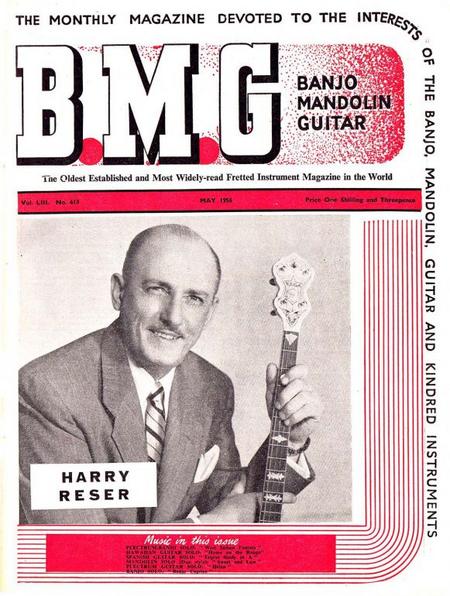 An advertisement stating that Julian Bream will perform solo and with tenor Hugues Cuenod and harpsichordist George Malcolm. In addition to the performances, Bream will be teaching guitar in the form of private lessons and masterclasses. 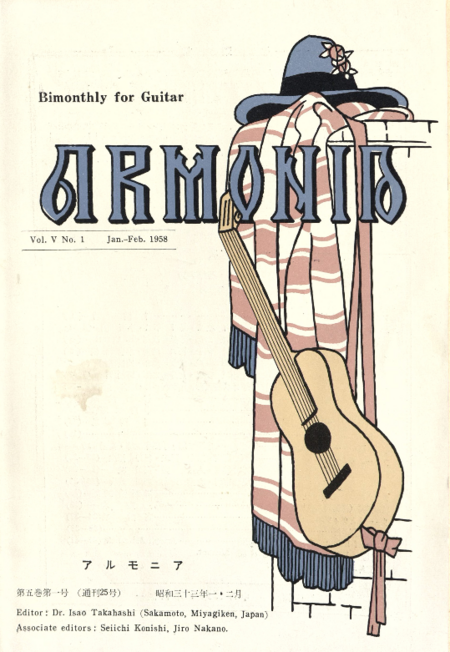 The article briefly discusses the playful rivalry that British classical guitar lovers have between Julian Bream and John Williams. 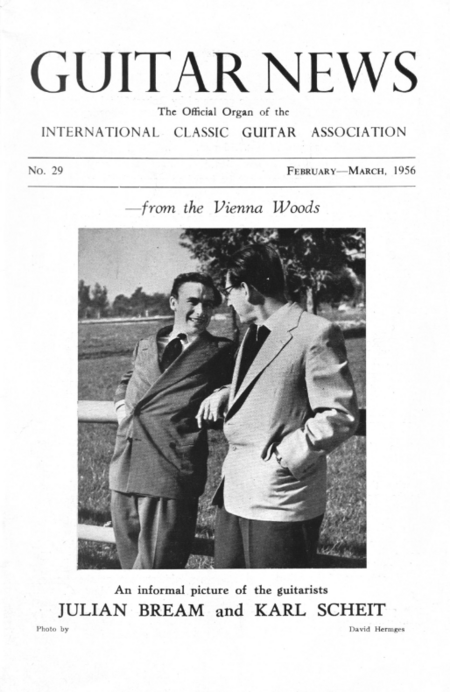 Dr Perott's autobiography "The Price of Happiness" appears like it will be published in the near future.

A one-line statement about Julian Bream's trip to the US. 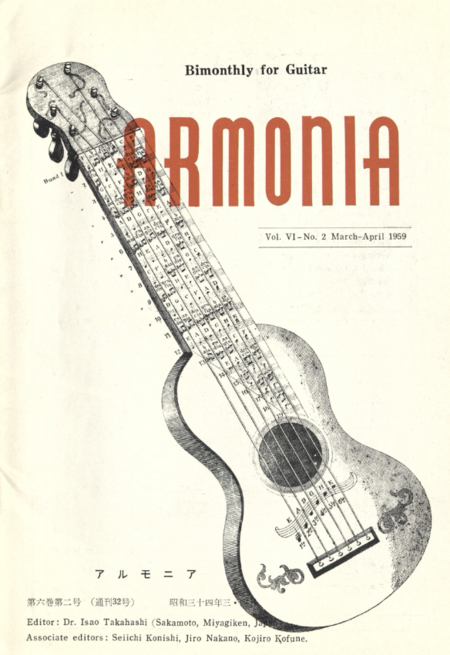 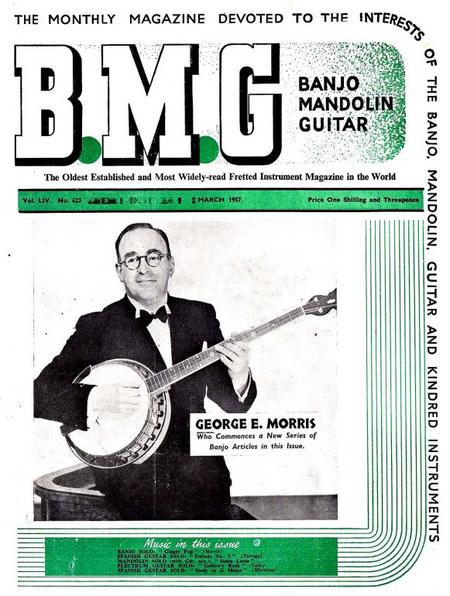 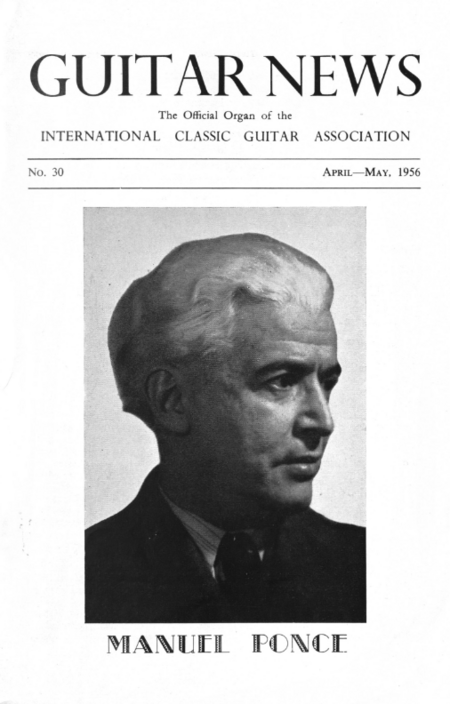 "The latest issue of the Japanese guitar magazine "Armonia" is devoted to Mozart and, apart from general information about famous composers, contains a full list of guitar arrangements of Mozart's works. The names of Julian Bream and John Williams occur in Western script amongst all the beautiful Japanese characters."

A favourable review of Julian Bream's Spanish Guitar Music: Turina, de Falla, Sor. Each piece in the recording is discussed.

"Julian Bream, who attended the Summer Music Festival in Dartington as a lecturer last August, appeared in five of the two-week concerts. At the recital, in addition to Bach's suite, Lennox Berkeley's Sonatina, dedicated to the premiere, was premiered and cheered."