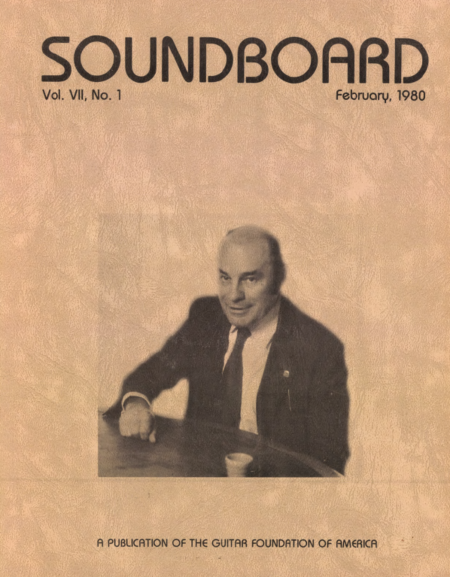 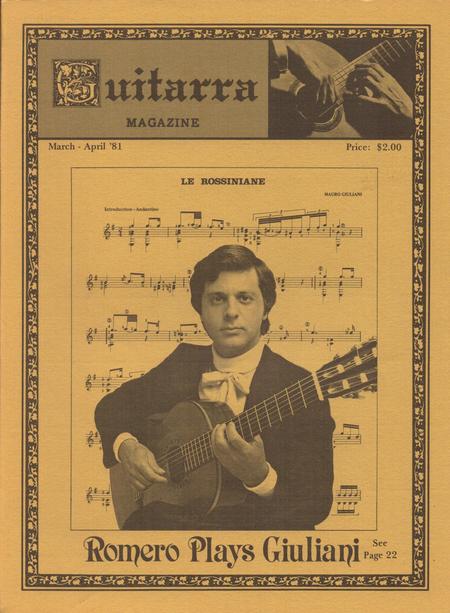 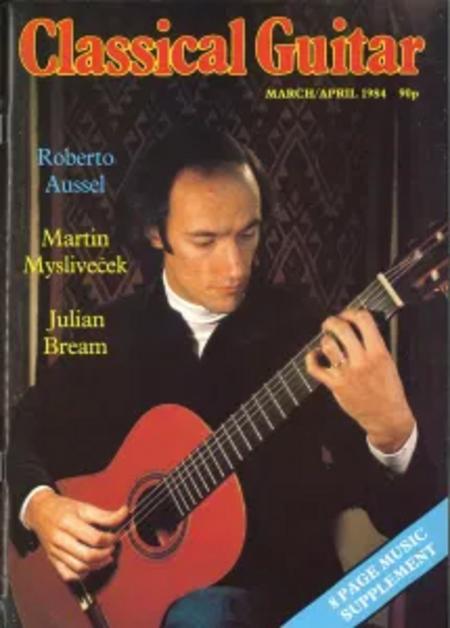 Julian Bream: A Life on The Road by Gregory Newton

Guitarra Magazine
The Guitar Around the World by James Sherry
Vol. , Issue No. 43, March - April 1981

Julian Bream cancelled a portion of his tour due to a very severe ear infection. 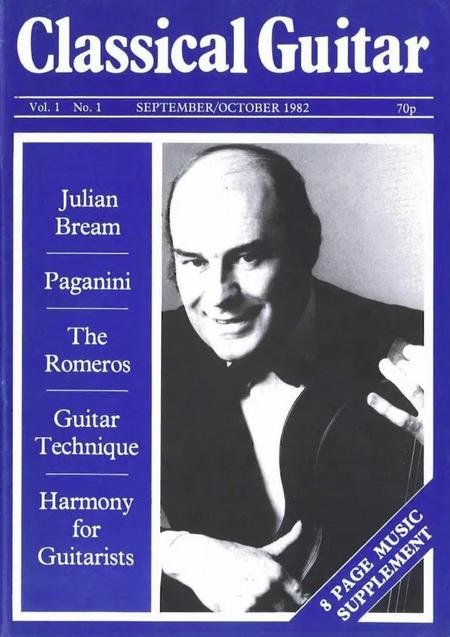 In part 2, Julian Bream writes about his early life from 1946 to 1965 when he received the OBE conferred by the Queen of England for his services to music.

The review was very complimentary. The reviewer stated that Bream revealed his "genius" on the guitar throughout the concert. He played a suite by Devisse, Weiss's "Tombeau sure la Mort de M. Compte de Logy" and "Fantasie". Next, he performed Bach's "Suite in E major", BWV 1006. the second half opened with Walton's "Bagatelles", then the new one-movement "Sonata" by M. Berkeley. He finished with Rodrigo's 'Tres Piezas Espanolas". 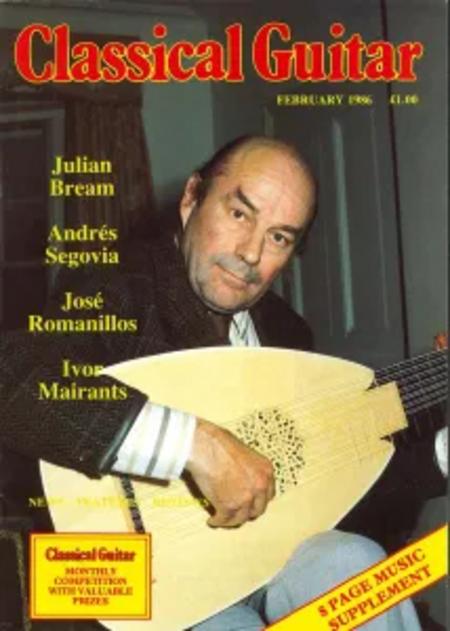 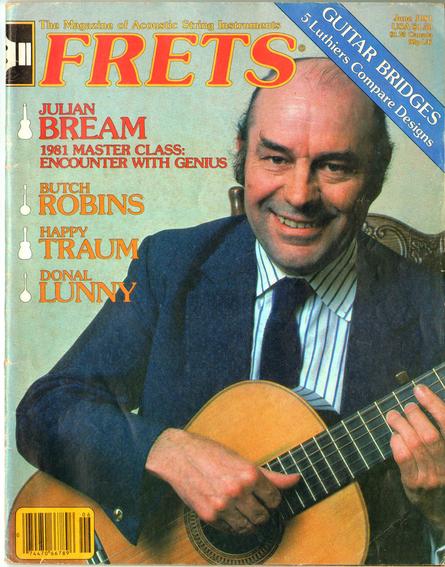 Romero: "The Rossinianes by Giuliani are magnificently written, but recordings of these have proven a lot of disrespect for the composer. One colleague of mine recorded one Roossiniane Op. 119 in this manner. Checkin mt facsimile edition of the work, I was shocked that what was in the recording and what was in the music were completely different. The middle section of the most difficult part was dropped out and the simple march from the Rossiniane Op. 122 was inserted into its place. After he got tired of playing that, he went right back to the Rossiniane Op. 119 in the middle of a motif as if he were playing in a night club. At the last page, he omitted everything until the very last bars. This is as obscene and as ridiculous as some conducted taking Beethoven's Symphony No. 5 and inserting half of the chorus of the 9th Symphony in place of the second movement." 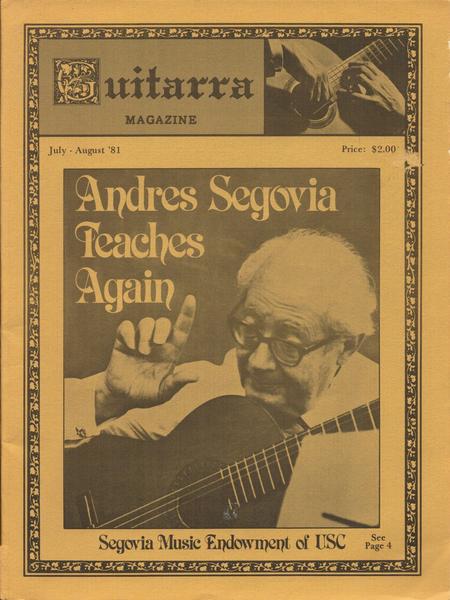 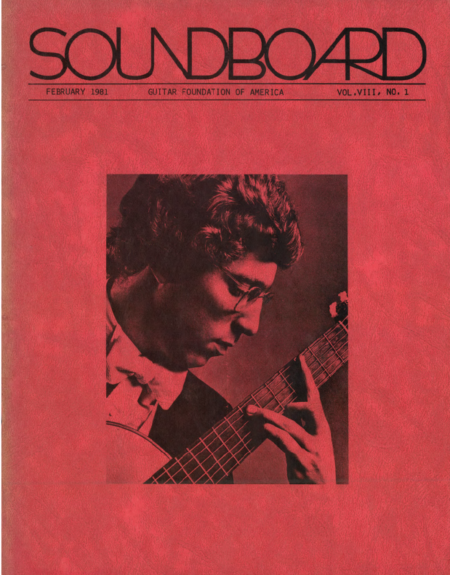 Bream Premiered the Michael Berkeley Sonata in the US in November 1982.

"Davies' latest solo guitar work is a nine-minute piece entitled 1117:1 Runes (1981) written for Julian Bream. 'Runes' are mystic songs or poems associated with Northern cultures, Norse or Finnish, and are divided into cantos."

It is, as I have commented, perhaps regrettable that entirely free communications are not possible, but that very restriction has permitted East-European guitar music to develop in its own way and to acquire its own strong character, minimally (where at all) influenced by the rent-a-program
stricken mainstream. This is particularly welcome in a world that is, as Julian Bream has commented, slowly but surely obliterating national characteristics through quick and easy communication, not to mention political and trading blocs. Too much contemporary music is al ready an expression (if that is the mot juste) of an ' international, anonymous, intellectualized
continuum' in which the indigenous characters of countries are virtually lost. If all this seems to be leading away from our main subject, it is not; it is merely to underline a welcome to this new injection of guitar- musical blood. It expands our technical horizons and as music it could only have been written by a Russian - and an immensely talented one at that. Of how much new guitar music can you say, in all honesty, that its country (or even global area) is clearly evident in its sound? Even more, how often is that identity apparent when folk music is not being used or quoted? This opens up lines of thought as to how composers should be trained and educated (while still relating to the society in which they live) but I will not pursue them here,  nor am I the best person to do so! For now, write down the name of Nikita Koshkin in your records - b 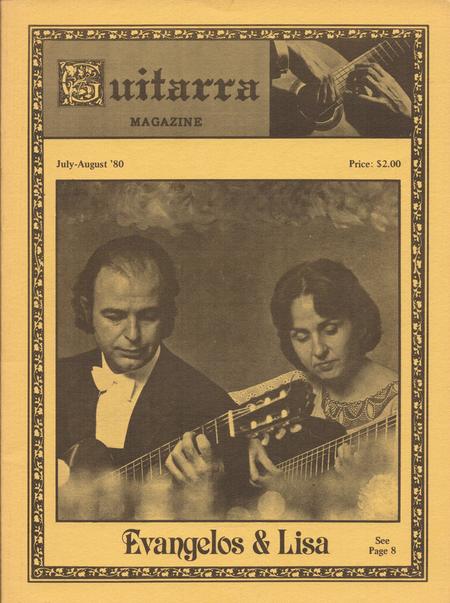 Very lengthy article that deals primary with the present and near future.

- The eight-part television series dedicated to the music of Spain scheduled to be done by early 1983.

- Debate on whether to use a lute or a vihuela for the Spanish renaissance pieces of the series.

- Considering using a Lacote guitar for the Sor compositions.

- How the Music of Spain Vol. 1 and Vol 4(Sor/Aguado) were released before they had decided to make each record LP volume match with the eight parts of the television series.

- Possible way to correct it was to make the two issued volumes (1 and 4) collector's items and never make them available again. Then start from the beginning using period instruments.

- No suitable vihuelas to play so Jose Romanillos built a Spanish vihuela - took 18 months to finish.

- Discussed the Dedication album and why he is considering revisiting the Walton "Bagatelles".

- Recording a short film of Bream playing the Bagatelles for Walton's 80th birthday.

- The inclusion of the lengthy Royal Winter Music on the Dedication album.

An in-depth discussion about Britten's "Nocturnal" dedicated to Julian Bream.

Discussion:
Article 1
-Early biography concise informative summary
-This article is heavy on the lute side of Bream
-Discusses Grammy award successes.
-Music period before and after the recording process
-Suggest that Hauser guitars are at the top of Bream's mind when talking guitars
-Briefly mentions his association with Romanillos
-Significant discusion about his 8 course lute by Rubio.
-his fingernailsand-how they continuously affect and change his playing
-his hand placement for the lute as opposed to the guitar
-use of tone color with the lute as opposed to the guitar
-his use of tablature for early worksand how he often transcribes it into 2 clefts
-composition: he enjoys it but has never recorded them and rarely plays them
-his love of outdoor games, gardening and walking
-his method of teaching

The Soundboard - The Guitar Foundation of America
The Contemporary Guitar (Hans Werner Henze) by John Wager-Schneider
November 1980, Volume 7, No. 4, p. 173-175

An in-depth discussion about the guitar composition of Hans Werner Henze including Drei Tento and Royal Winter Music.

In part 1, Julian Bream writes about his early life with the guitar and music in general. This part goes all the way from 1933 (the time of his birth) to 1946 and his meeting with Andrés Segovia.

Paul Michaels, a magazine subscriber, asked the question on how to best avoid tendonitis as a guitarist. The editor responded by saying that among other things, exercise was very important. He then stated that guitarist with thicker arms were not as likely to develop tendonitis and do not have to exercise their arms as frequently as someone with a slender physique.  Then he used Segovia and Bream as examples of two guitarists that would likely not have to exercise their arms as frequently. He referred to both of them as "brawny men". 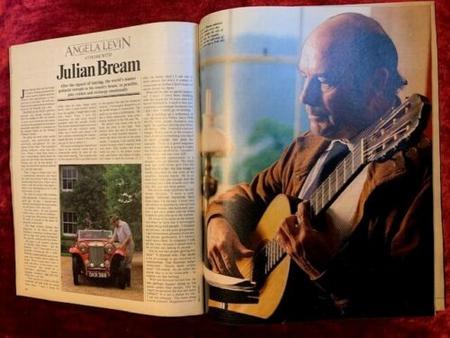 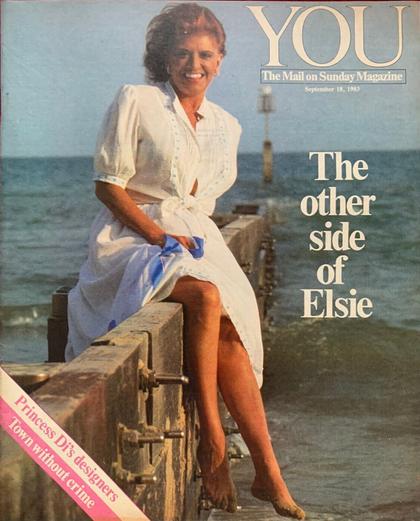 James Sherry's article written in 1981 remembering back to conversations from 1965 to 1968. According to Sherry, Bream played a Bouchet in the US in 1966, 1967.  The article states how Bream has strong opinions about the guitar and will not easily accept other points of view. Not sure if it was the same guitar. Sherry mentions in the article that Bream told him later on (assuming late 1960-early 1970) that the Bouchet was lost by the airline in a baggage mixup and it was never recovered.

Not sure if this is the same Bouchet guitar that was stolen from Bream's car or if Bream had the misfortune of losing TWO Bouchet guitars in one lifetime. 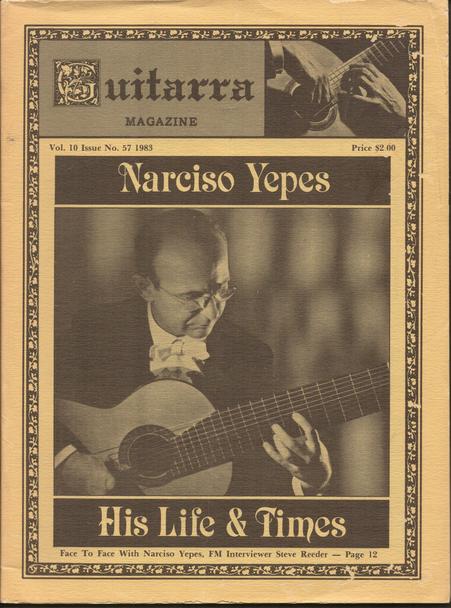 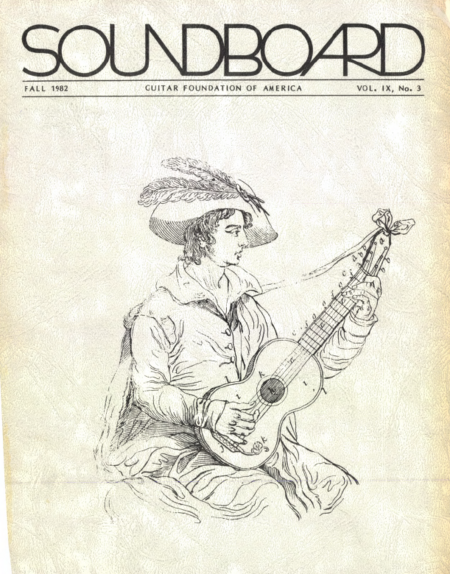 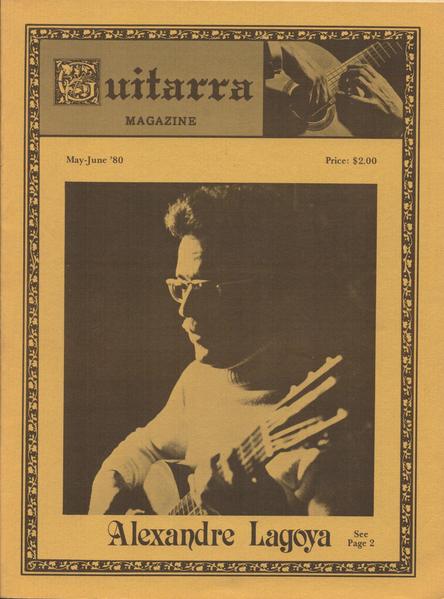 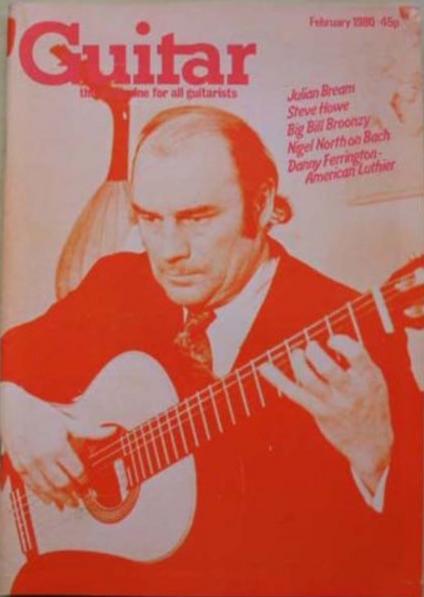 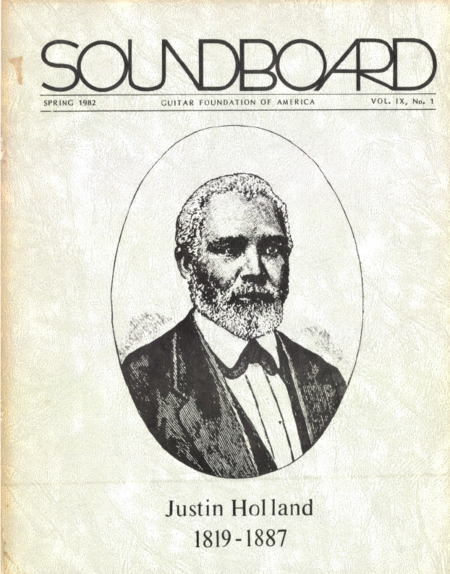 "A good personality is a powerful ally. Alice Artzt, Julian Bream, Leo Brouwer, Alirio Diaz and Sharon Isbin are only some of those who communicate goodwill to an audience as soon as they come on stage, creating a friendly impression. Others (compile your own listing) lack this gift and have to work harder to win an audience's goodwill and enthusiasm." 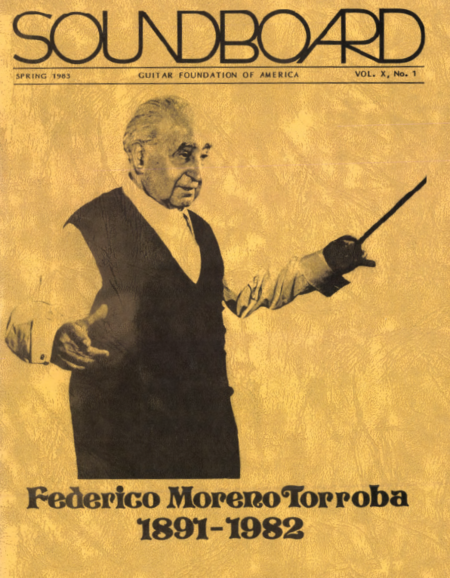 The Soundboard - The Guitar Foundation of America
Conversation with Eliot Fisk by John Wager-Schneider
February  1981, Volume 8, No. 1, p. 10-17

A lengthy interview with Eliot Fisk. Eliot compares how he plays one of the Bach Lute Suites with the way Julian Bream approaches the suite. 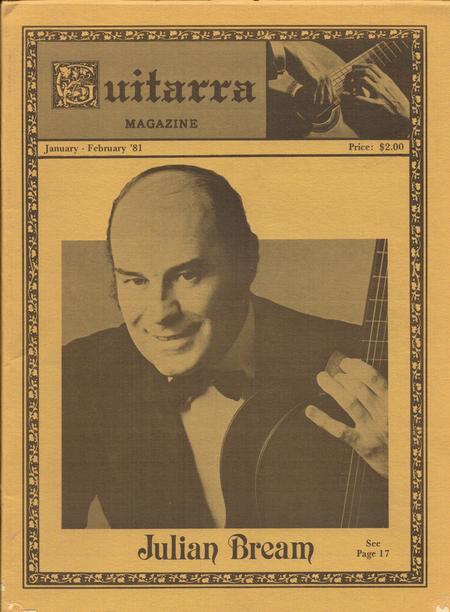 Bream And Segovia at the Philharmonic - as told by Johanna Vollers

Review: Julian Bream: A Life on the Road by Tony Palmer

A review of the book Julian Bream: A Life on the Road by Tony Palmer that had been released 4 years prior. A very positive review about Bream as a performer and personality. 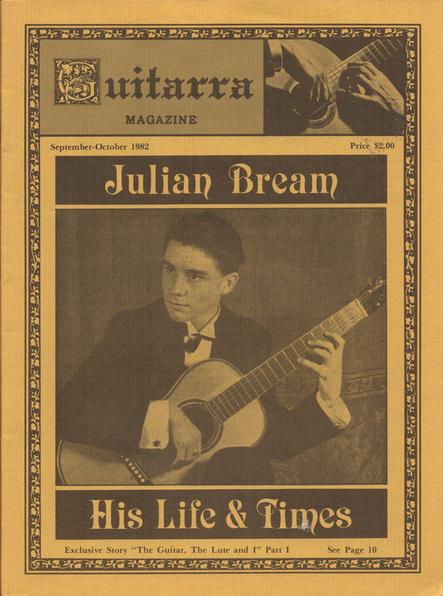 When Bream Met Brouwer for the ‘Concerto Elegiaco’ by Colin Cooper

Was reviewed as an exceptional performance. 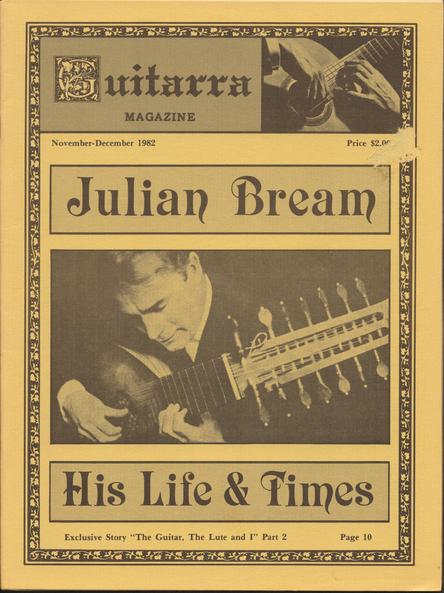 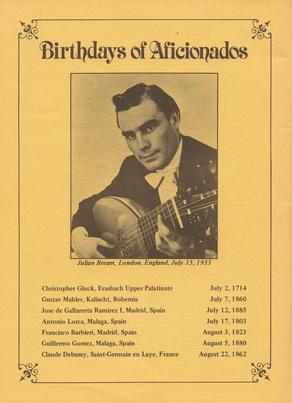 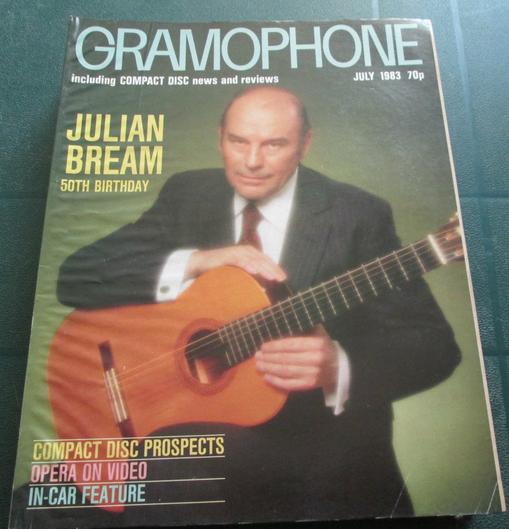 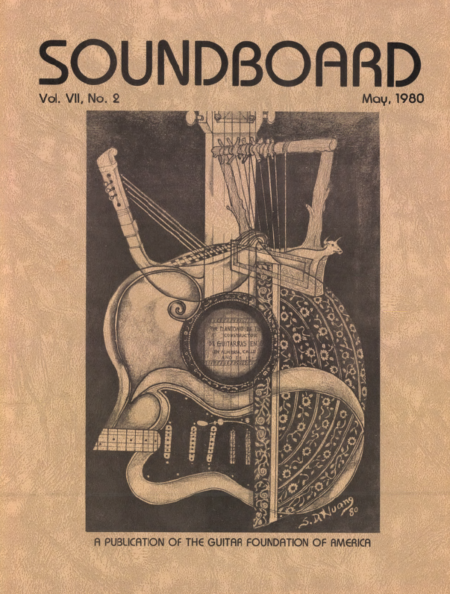 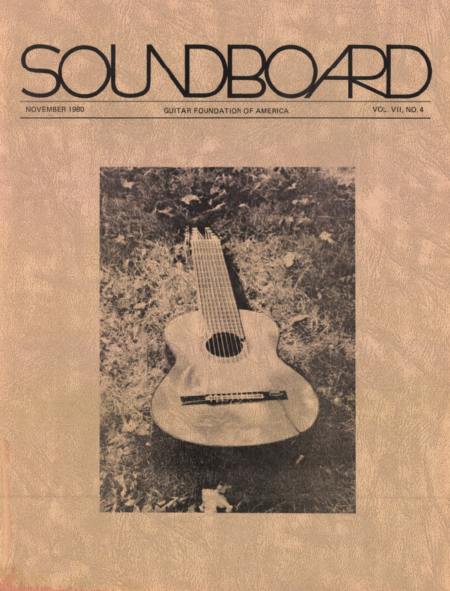 This Classical Guitar article is available online on their website 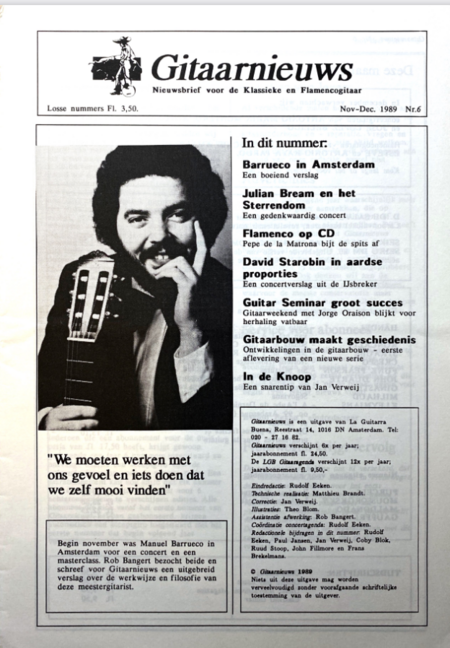 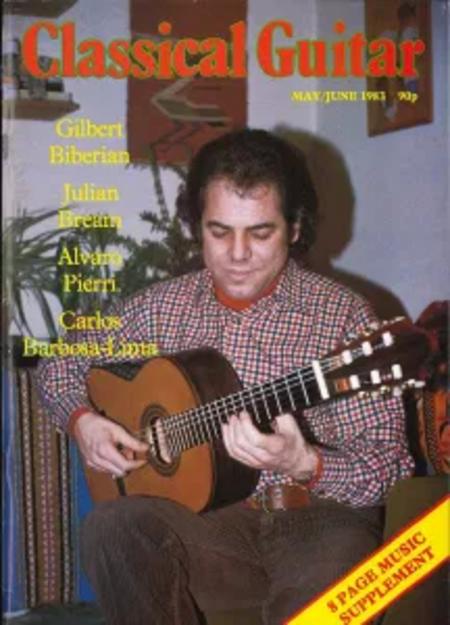 The Guitar Around the World by James Sherry

London, England: A quote from Julian Bream. On control..." It's not playing pretty well when you are in a good mood. It's being able to play very well when you're out of sorts."