Andrés Segovia was to prove a significant influence throughout Julian Bream’s career. In the early days, with his concerts and recordings, he provided a unique inspiration for aspiring classical guitarists that no one else could really . Later, he would provide a frame of reference that Julian could either choose to follow or depart from in order to develop his own individual style.

Andrés Segovia, was a virtuoso Spanish classical guitarist from Linares, Spain. Linares, in the Jaén province, is located in the Andalusia region of southern Spain which happens to be an area that is often associated with being the heart and soul of the Spanish guitar.  The Spanish guitar is considered to have two faces or spirits that at times have been difficult to distinguish from each other. The classical and the flamenco. Segovia helped to create a distinction between these two spirits of the guitar and defined the role of the modern classical guitar in Spain and then the rest of the world.  He is generally considered to be the father of the modern classical guitar and is regarded as one of the greatest guitarists of all time. There were actually a handful of extremely talented guitarists around at the time that Segovia was establishing his career but none of them commanded the respect for the classical guitar that it deserved and needed in order to become part of the international stage.

Segovia's contribution to the modern-romantic repertoire not only included commissions but also his own transcriptions of renaissance, baroque, classical and early romantic works. He is remembered for his expressive performances and a wide palette of tone, with a distinctive musical personality, phrasing and style.

Segovia was sent at a very young age to live with his uncle Eduardo and his wife Maria and it was they who realized that the young Segovia had an aptitude for music. While the young Segovia did initially study the violin, this was very short-lived for it was not long before he realized that his heart was drawn to the sound of the guitar.  Though Segovia actually had an appreciation for very traditional flamenco, it was the refined guitar sound produced when the instrument was used to interpret the works of Sor, Tárrega and other classical composers that really moved him. Additionally, Tárrega had agreed to give the self-taught Segovia some lessons but died before they could meet. Segovia has stated that his early musical education involved the "double function of professor and pupil in the same body". He did become very close friends with several of Tárrega’s pupils who remained very loyal to Tárrega's teachings. While Segovia did have some musical disagreements with some of Tárrega's pupils, these associations helped him define the future course of the guitar early on.

In 1909, at the age of 16, Segovia played his first public performance in Granada. His first professional concert was played in Madrid a few years later which included works by Francisco Tárrega and his own guitar transcriptions of J.S. Bach. Segovia pushed forward with what he saw as the rightful path for the classical guitar and developed his own technique along the way through trial and error whilst many around him tried to dissuade him or even purposely obstruct his path.

He played again in Madrid in 1912, at the Paris Conservatory in 1915, in Barcelona in 1916, and made a successful tour of South America in 1919.  Segovia’s strength of personality and artistry coupled with his willingness to embrace new technological advances such as recording, radio, and air travel, allowed him to succeeded in growing the popularity of the classical guitar and himself as a performer over the efforts of other accomplished guitarists of the times. His association with other musicians and composer such as Llobet, Tansman, de Falla, Ponce and Villa-Lobos, allowed him to further extend the acceptance of the guitar on the international stage while expanding the repertoire for his instrument.

After World War II, Segovia began to record more frequently and perform regular tours of Europe and the U.S., a schedule he would maintain for the next thirty years. It is at this time that Julian Bream’s journey commences as his passion for the classical guitar begins.

While Julian’s first attraction to musical sound was from the piano his dad had just bought, the attraction towards the guitar started soon afterwards. Then in the following year he hears a recording on a 78 rpm record of the Tárrega tremolo study “Recuerdos de la Alhambra” played by Andrés Segovia. He knew then that he would devote his life to recreating that magical sound and the feeling he experienced when he heard that recording.

It wasn’t long after the war that Segovia came back to Europe and performed throughout its major cities. In 1947 he stops in London to perform and Julian was in the audience to capture the maestro’s magical performance. Young Julian came with his binoculars and was glued to the maestro’s hands for he was hungry for guidance in the area of technique.  A meeting was set up so Julian could meet with Segovia and perform. Segovia was very impressed with the child guitar prodigy and even offered to take Julian with him out on the road. It would have been an intense teaching experience for Julian including continuous private lessons and constant exposure to the pressures of performance and being away from the comforts of home and family, provided that Julian’s father could come up with the financial support for such an experience. In the end, either due to lack of financial support or Segovia realizing the immense responsibility of travelling with a child, the whole opportunity fizzled out and soon it was never mentioned again. Julian was to set his own path and instruct himself in much the same way that Segovia had done when he was learning the guitar during his youth. In retrospect, not having a close association with Segovia likely benefited Bream because he was free to develop his own voice despite playing the same instrument and sharing a similar repertoire. 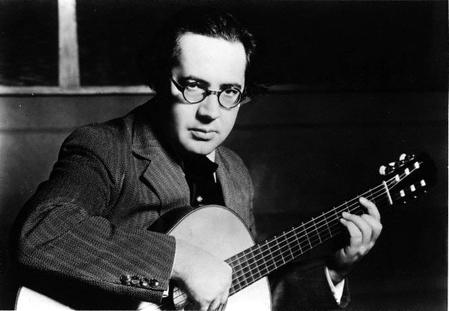 Aside from a hotel meeting around 1957 when Julian was already an adult, Segovia and Julian’s paths do not appear to have crossed again in a significant manner although they would at times briefly comment about each other in interviews.  Segovia did comment at least once that he felt Julian should not dilute his talents by spending time learning other stringed instruments such as the lute.

Another significant difference between the two guitarists was the selection of material. Julian early on decided that he would not follow the Segovia selection process of works to be recorded or performed in concert. Segovia only performed works with which he identified personally. For the most part, he would perform only the parts of a suite that he preferred and completely neglected the others. Julian decided that he would, whenever possible, present the whole suite or collection of works as intended by the composer.

Both guitarists had a healthy appreciation for the music from the renaissance, baroque, classical and romantic periods and would regularly record and perform works from these periods throughout their entire career. When it came to twentieth-century composers, there were definite differences in the selection process of each guitarist. Segovia was often dismissive of music that did not have what he considered the right classical origins, such as South and Central American music with popular roots. He also rejected modern atonal compositions even if they were written for him. Thankfully, Julian decided to take a different route and interpreted many contemporary British composers that explored both romantic and modern atonal concepts. While Julian Bream never recorded any of the famous Central and South American composers except for Villa-Lobos, he did oftentimes perform their works in concert. He was known to perform works by Ponce and Barrios on several occasions.

Segovia plucked the strings with a combination of his fingernails and fingertips, producing a sharper sound than many of his contemporaries. With this technique, it was possible to create a wider range of timbres, than when using the fingertips or nails alone. Julian adopted this same technique for the most part but many would say that Bream added a larger range of tone and colour to the sound by significantly moving his hand throughout a piece from the bridge to the soundhole. The types of strings used on a guitar also changed the way a guitarist could project his music on a recording or the concert stage. When Segovia started to endorse nylon strings over gut strings, the entire guitar community followed and so did young Julian. As a boy, Julian cherished his first set of nylon strings as if they were gold. He would only switch his gut strings for the nylons string when he had a performance so as not to wear them out.

Segovia would continue to pave the way for other guitarists throughout the 1950s all the way through the 1980s. Granted, while it is very likely that Julian would have become a great guitarist even without Segovia laying down the path first, Bream would have had a far more difficult time commissioning works, recording records and winning awards if Segovia had not had those achievements first.

The widely celebrated Spanish composer, Joaquín Rodrigo, dedicated Fantasía para un gentilhombre (Fantasy for a Gentleman) to Segovia in 1954. Segovia won the 1958 Grammy Award for Best Classical Performance, Instrumentalist for his recording Segovia Golden Jubilee. These were very significant achievements by a musician that chose an instrument that 50 years prior nobody ever thought they would hear on the classical concert stage.

In recognition of his contributions to music and the arts, King Juan Carlos I of Spain ennobled Andrés Segovia on 24 June 1981 with the hereditary title of Marqués de Salobreña in the nobility of Spain. Segovia was awarded many prizes and honorary doctorates during his lifetime.  He also received the Danish Sonning Award in 1974, the Ernst von Siemens Music Prize in 1985, and a Grammy Lifetime Achievement Award in 1986.

Andrés Segovia continued performing into his old age, living in semi-retirement during his 70s and 80s on the Costa del Sol. He died in Madrid of a heart attack at the age of 94 and is buried at Casa Museo de Linares, in Andalusia.

The guitar in the hands of Segovia was capable of evocativeness and depth of interpretation and he can be considered a catalytic figure in granting respectability to the guitar as a serious and legitimate concert instrument. It was Federico Moreno Tórroba who said: "The musical interpreter who fascinates me the most is Andrés Segovia". Prior to Segovia, the guitar was viewed as a limited, parlour instrument.

The Segovia Museum "Fundación Andrés Segovia" was established in May 1995 in Linares, and the city also has a bronze statue in his honour. Julio López Hernández was commissioned to create the statue and it was unveiled on the 25th of May 1984.

Segovia influenced a generation of classical guitarists who built on his technique and musical sensibility, including such luminaries as Julian Bream, John Williams, Christopher Parkening and Oscar Ghiglia, all of whom have acknowledged their debt to him. Furthermore, Segovia left behind a large body of edited works and transcriptions for classical guitar. 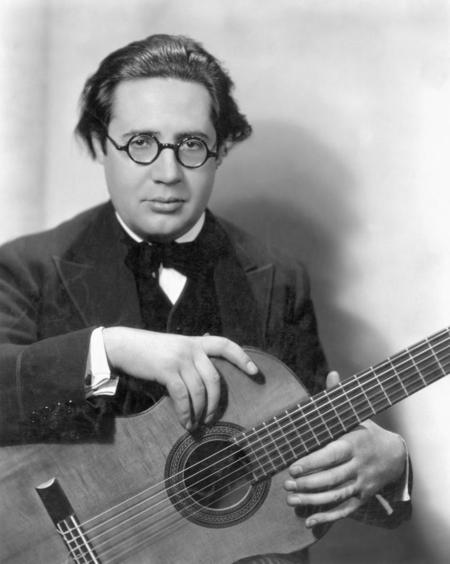 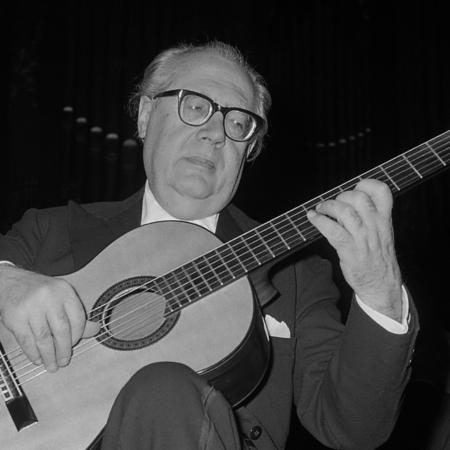 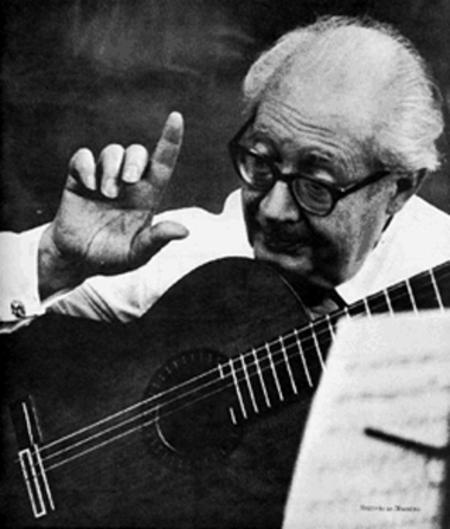