Initially, it was the jazz guitar music of Django Reinhardt that provided the guitar inspiration in the Bream household but when Henry brought home a 78rpm recording of Andrés Segovia playing Tárrega's tremolo study "Recuerdos de la Alhambra", Julian's fate was sealed. They both fell in love with the beautiful sound of the classical guitar. Despite the fact that Julian had done poorly in school, Henry bought his son a small Salvador Ibáñez classical guitar for his 11th birthday. Henry and Julian attended the first post-war meeting of the London Philharmonic Society for Guitarists (PSG) on the 21st of April, 1945, and soon they were both deeply immersed in studying the classical guitar together. Henry also volunteered to be the librarian of the PSG to facilitate Julian's accessibility to sheet music. It was not long before Henry started falling behind as Julian's gift for the guitar was becoming more apparent. Soon Julian started to become very accomplished on the instrument and Henry was left to live vicariously through his son's early success as a musician. Henry and Julian worked toward a common goal which was to develop Julian abilities as a great musician. Since we only know of Henry through his relationship with his son Julian, it almost appears as if he dedicated the last 6 to 7 years of his life ensuring that his first son became a successful guitarist.

It appears that Henry struggled enormously with all decisions that pertained to Julian's future as a guitarist. Making choices for someone that was too young to make his own decisions created an even bigger burden for Henry given that decisions made early on often tend to affect the rest of your life in one way or another. Given Julian's young age, he respected his father's advice and authority and concentrated on practising his music while Henry managed everything else. One of the early dilemmas he faced was not being able to provide the financial assistance required to further his son's career. Finances affected nearly everything: musical education, the purchase of suitable guitars, travelling, venues for recitals and promotions. Additionally, the more time he spent on Julian's future career, the more his own business declined. It must have hurt Henry's pride to feel that everything he wanted for his son required him to ask for the help of others. At one stage in 1948, when Julian was due to start studying piano at the Royal College of Music, Henry agreed for Julian to go to live at the home of Miss Vollers, who had a grand piano. Their own treasured piano had been sold. Thankfully, there were many willing to help but, as usual, the help offered was accompanied with terms.  All these offers to help with "terms" created many hours of pondering which decisions to make. The most direct "term" was presented by supporter Wilfred Appleby. Under no uncertain terms was Julian to spend any time playing any guitar "variants". Julian was to only play the Spanish classical guitar or he would terminate his support.

Henry loved the guitar but he also knew that it would be hard to make a living with an instrument that was not taken seriously. This led him to push Julian toward the piano and the cello while initially keeping the guitar in the background. While Julian's early piano education was unmistakably invaluable to him, it was not long before everyone, including Henry, realized that if Julian had an opportunity of being successful, it would be with the instrument that he was passionate about playing - the classical guitar. Despite his initial reluctance, Henry supported Julian in making the guitar his main focus not just because he was passionate about the instrument, but mainly because he was so obviously gifted when it came to playing it. Henry’s change in attitude towards Julian concentrating his efforts on the guitar can be narrowed down to the 30th of March, 1946. Julian played Fernando Sor’s difficult “Grand Solo for Guitar” at the PSG meeting. It was this night that Henry realized that the people in attendance were not just merely excited by a child with extraordinary skills at playing the guitar, they were emotionally captivated by the performance. It was then that Henry decided to really listen himself and realized that Julian had the gift to move people with his guitar playing.

When Andrés Segovia offered to take young Julian with him on his travels for a year or more, Henry was once again faced with a dilemma and having to make a decision on his son's behalf. Had the decision been in reference to himself, then it might have been easier. The decision, in this case, involved his very young son. He and Julian had been on this classical guitar path together for several years which resulted in an increased amount of time spent in each other's company. If he made the decision to send Julian with Segovia, their roads would part. In addition to being apart from his son, there was the pressure of knowing that constant exposure to a strong-minded individual such as Segovia could end up suppressing Julian's individuality. His remedy for the situation was to encourage Julian to take the guitar into new musical territory not explored by Segovia. Julian would create an outlet for the British classical guitar composers that Segovia would have never provided. A musical influence that could spill over into his interpretation of the Spanish music in which Julian and Segovia shared a common interest. This would help Julian maintain some of his individuality whether he chose to pursue the tutelage of the maestro or not. This would become a pivotal point in Julian's career as a professional classical guitarist later on. A decision that clearly defined and set Julian apart from the already hugely famous Segovia. This could arguably be Henry's most important decision on his son's behalf, to guide him towards the influence of modern British composers and acknowledge their worth in the world of classical guitar music.

Julian would have likely found the guitar without his father's help. It is also likely that Julian would have become a successful guitarist without anybody's guidance but his own. However, there is no question that Julian's path was made significantly easier by his father's guidance and his determination to push Julian forward despite the obstacles.  Henry made the best-calculated decisions that he could on his son's behalf but at the same time, he tormented himself with those decisions before and after making them. He wanted success for his son and it didn't need to be with the guitar. His son's passion for the guitar was initially not really enough for him. He had to experience the feeling of being moved by his son's guitar playing in order to realize that the classical guitar was the path to Julian's success.

Sadly, Henry did not live long enough to see clear signs that his son would definitively succeed as a classical guitarist. His own measure of Julian's success as a classical guitarist would have been a recital at the prestigious Wigmore Hall, but that did not come till after Henry's death.  A few times the Wigmore Hall came close to reality within his lifetime and something would happen to destroy that reality. Henry's consolation prize was knowing that his son was a truly gifted musician that had the ability to move those that came close enough to hear him play his classical guitar. How many people that would be, he would never know. 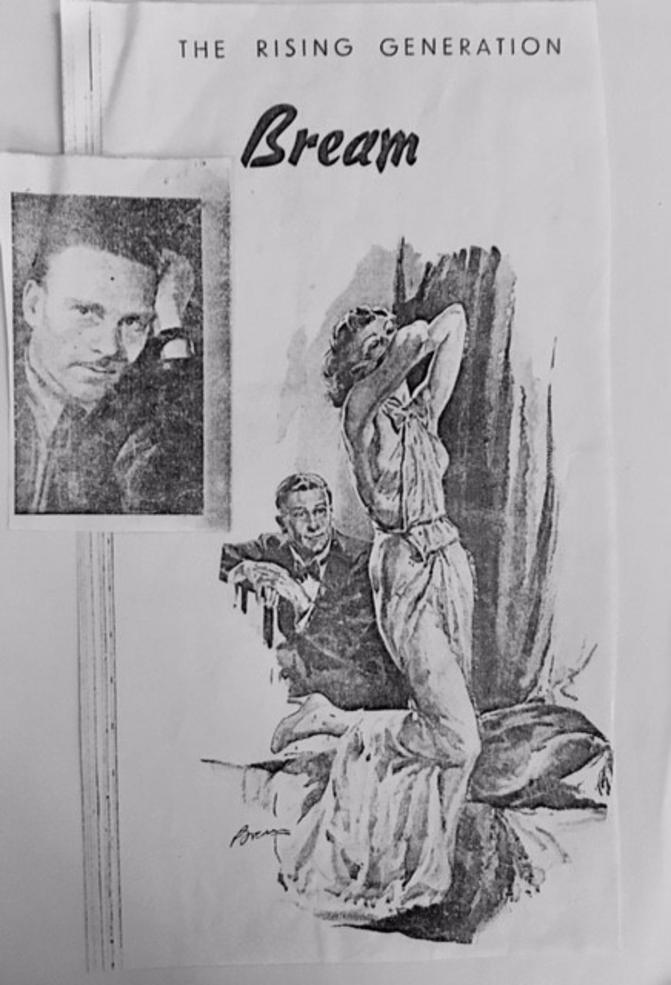 This was the only work by Henry G. Bream that Stuart W. Button could locate at the time of his research for his 1997 book, Julian Bream: The Foundations of a Musical Career. Henry Bream created hundreds of works as a commercial artist in the UK for Coca Cola, Benedictine and covers for Somerset Maugham stories among others. This particular art is a wash copy of the actual piece submitted to the monthly periodical Advertising - the August 1937 issue. His self-taken photograph on top of the artwork demonstrating the aspiring new generation of commercial artist.

"I well remember the great joy that I had as a young girl travelling the London underground, in the early fifties after his death, the great source of pride and comfort that it gave to me. Seeing his last efforts displayed in public." 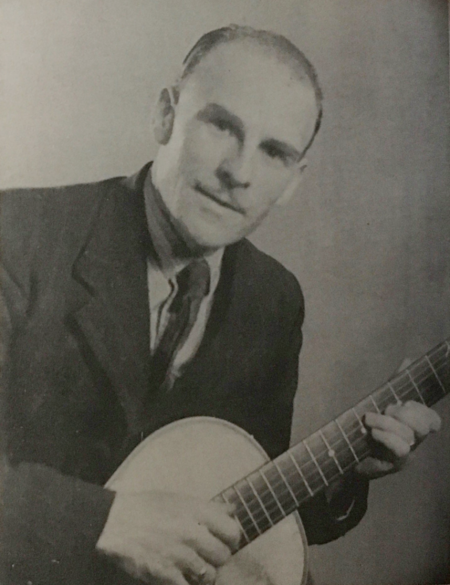 Henry George Bream was a successful commercial artist and amateur musician but most importantly he was a devoted father to all four of his children. Julian Alexander Bream was his firstborn son and by the time Julian was 10 years of age, Henry was comfortable enough that he could buy a home and spend time on hobbies. He enjoyed constructing radio receivers and he loved listening to music. He also liked to buy instruments and spend time learning how to play them. Little did he know that he would spark the interest of his small son and soon he would be teaching him what little he knew about classical guitar music. In his first son, he essentially found a musical soulmate that was willing to spend time with him working on learning all aspects of music. Julian's earliest memory of music is lying on the floor underneath the baby grand piano while his father, although unable to read music, played beautifully by ear. Henry had learned how to play jazz guitar and soon started to teach Julian how to play as well. Henry came home early from work one day and caught Julian joyfully strumming one of his guitars along with the radio station. Julian initially thought he was going to get reprimanded but instead, Henry asked him if he wanted to learn how to play. Julian studied the guitar early on with his father and later they played together in small informal jazz bands around town. Henry created a small children's band for Julian to play with called the Minormonics and he also included his daughter Janice in the children's group and had her sing a song he wrote for her called "Little Girls in Blue" while Julian accompanied her on guitar.  In addition to playing in the children's group, he also allowed Julian to sit in with him in the adult band, the Majormonics.