Avie Records along with Music on Earth productions have released a documentary based on Julian Bream's life. Directed by Paul Balmer. Available through Presto Music and Amazon (2006). 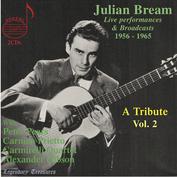 Julian Bream: A Life on the Road

The legendary hardcover book had been out of print for decades and has now been re-released as a paperback and for Kindle user.

Julian Bream:
My Favorite Albums
RCA Red Seal release prior to
the complete box set. A great taste of the Art of Julian Bream 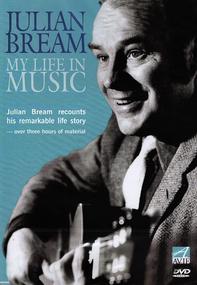 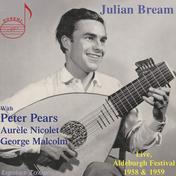 Autobiography???
We are still anxiously 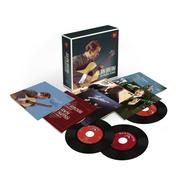 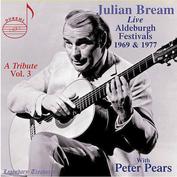 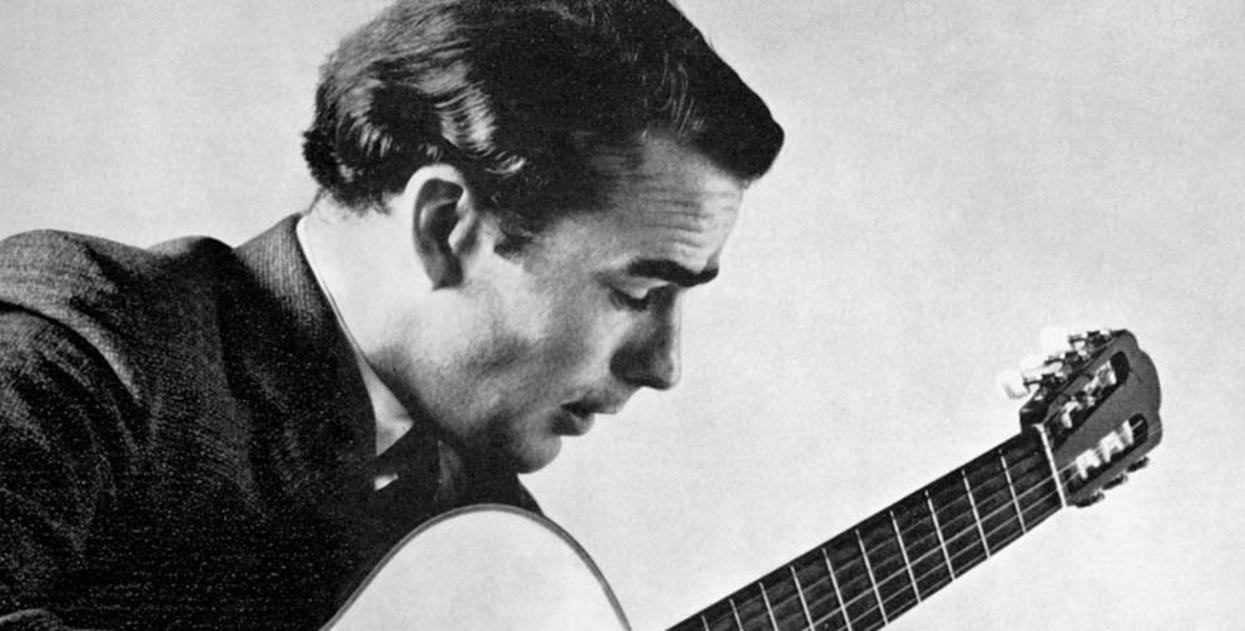 ​Julian Bream
Welcome to the website dedicated to "The Art of Julian Bream"!

I COULD NOT BE MORE PLEASED THAT YOU HAVE FOUND MY WEBSITE ON JULIAN BREAM!

This is NOT Julian Bream's official website. As far as I know, Julian Bream has never had an official website. Nor does it appear as if Westminster, RCA, EMI or Sony Records have ever maintained a website for the musician. Given that Julian Bream is considered such an iconic figure in the world of classical guitar, he is mentioned in almost every website that is dedicated to discussing the instrument and its associated music.

Julian Bream had been retired for 18 years at the time of his passing in 2020; therefore, no new recordings are expected to surface. Still, there is so much information available on his life that I think updating this site will keep me busy for some time. So, peruse at your leisure and check back often - you never know when something NEW is going to pop up for your musical enjoyment! What I am referring to is the 2013 box set. That RCA/Sony Music would follow up "Julian Bream: My Favorite Albums" with the release of the beautiful box set  "The Complete RCA Album Collection" was a BIG SURPRISE!

Please make note that I did not know Julian Bream personally. I had seen him perform in concert and I had met him briefly.  I do NOT have any contact information for the Julian Bream estate.

The Royal College of Music celebrates the life of eminent classical guitarist Julian Bream in this one-day festival of concerts, masterclasses and more. The festival features some of the finest players on the international guitar scene. Hear solo and chamber music from talented RCM guitarists, enjoy performances by jazz musicians and RCM alumni, and join in family-friendly activities throughout the day. The festival culminates in an evening concert showcasing the exceptional talent of guitarist John Williams and guests. RCM YouTube link

Julian Bream performed at Friedberg Hall of the Peabody Conservatory on October 17, 1967. He performed music by Besard, Dowland, Dalza, and Byrd (lute) and de Visee, Weiss, Diabelli, Granados, and Pujol (guitar). This recorded concert will air on WBJC's "Music in Maryland" program with host Jonathan Palevsky. In connection with the broadcast, Palevsky interviewed Manuel Barrueco, a classical guitar instructor at the Peabody Institute in Baltimore, Maryland. The Baltimore Classical Guitar Society made Julian Bream's historic LIVE concert performance available for broadcast with the support of Julian Bream's Estate and the Peabody Conservatory.

Rick Beato: This Song From the 1500’s Blows Me Away (John Dowland/Julian Bream).

Rick Beato has a very popular YouTube channel dedicated to music. He is an accomplished musician and discusses all aspects of music in his videos, especially relating to rock, jazz and pop genres. Occasionally, he has made very informative videos associated with classical music. He dedicated this video to John Dowland and the person who has done the most to promote Dowland's music, Julian Bream. YouTube link.

José Luis Romanillos has passed away.

José Luis Romanillos passed away on February 12, 2022, at the age of 89.
Our condolences to his wife Marian and his three sons Jose Luis, Ignacio and Liam. We also extend our condolences to the rest of his family, friends and students. The classical guitar community has lost one of its icons.

The Julian Bream Trust presents Diogo Carlos at the Wigmore Hall (November 21, 2021)
Diogo Carlos is the newest Julian Bream Trust scholar and on the 21st of November 2021, he will be presenting a full programme at the Wigmore Hall including a newly commissioned piece by the trust. It will be the World Première of "Sea Voyage" by the composer Roxanna Panufnik. This piece is a dedication to Julian Bream. How appropriate given his recent arrival at Ithaca. https://wigmore-hall.org.uk/whats-on/diogo-carlos-202111211930

The 2021 New York Guitar Festival celebrates the classical guitarist/lutenist Julian Bream with a series of daily performances beginning July 14th and continuing until the 20th of the same month.

Robert Tilleard has allowed the site to display his very personal Julian Bream portrait, May 2021 Already in retirement, Julian Bream commissioned a portrait of himself with his beloved "Django".The portrait was a very personal request by Julian and it was hung at his home with little publicity. Robert Tilleard was kind enough to allow his work to join the other Julian Bream portraits that have recently graced the pages of the julianbreamguitar.com site. The painting will soon make its way to Wigmore Hall for all to admire.

Michael Taylor has allowed the site to display his famous Julian Bream portrait. May 2021

When I contacted Michael Taylor to see if he would consider allowing julianbreamguitar.com to display his famous portrait of Julian Bream, I wasn't sure that I would hear from him. Well, he contacted me within 24 hours and he stated that he would be honoured to have his painting displayed on this site. Not sure that I was expecting it to be so easy. He has praised the site more than once. Thank you so much for your kind words.

Chris Roy has allowed julianbreamguitar.com to display his sketch of Julian Bream. May 2021

I was going through Mr Roy's sketches of rock stars on his Facebook page (yes, I love rock music too) and all of a sudden I ran into a portrait of someone who looks like Julian Bream. I immediately thought "this must be a portrait of someone else that looks like Bream". I opened up the picture and sure enough, it was titled "Julian Bream". A fantastic sketch of the classical guitar maestro among a slew of rock star portraits. BREAM ROCKS!

Janice George-Allen, Julian's sister, has shared her ART with julianbreamguitar.com

Many may know that Julian's father Henry was a successful commercial artist but one thing you may not is that two of Julian's siblings inherited his skills with the pencil and brush. Janice, a successful artist in her own right, has been kind enough to offer her very personal sketches and drawings inspired by her brother Julian for display here at the Janice George-Allen page at julianbreamguitar.com.

Marie Betts from England has started helping me extensively with the editorial work on the site. Since I started this site nearly 10 years ago, I have been furiously typing away and rarely looking back. When I do, I realize that I have left a myriad of misspellings and grammatical errors in my wake. Marie is diligently reading and re-reading and then sending me corrections to make. She is also gently pushing me to finish the many half-finished projects on this site as well as doing some new research for the site as well. She is involved with local classical music events in her home town and she is a Bream fan. Marie, for however long I have it, THANK YOU very much for your help!!

GRAMMY In Memoriam - Recording Academy Remembers The Music People We've Lost
Take a moment to reflect and salute the members of the music community who we lost in 2020-2021
THE GRAMMYs - Mar 14, 2021 - 6:29 pm

February 2021.  The virtual concert is hosted by renowned composer and scholar Stephen Goss. The tribute concert features some of the works written for and premiered by Julian Bream.

The Lute News has published three different articles in their October 2020 issue.

The digital version of the magazine launched an ongoing series celebrating the legacy of Julian Bream by posting many of the old articles that have been published by the magazine in the past.

"Into the rose-garden"
Andrea De Vitis, a highly accomplished Italian classical guitarist, has commissioned a piece from composer Angelo Gilardino in memory of Julian Bream.

Julian Bream has passed away!

Our condolences to Julian Bream's family and friends and to the classical guitar community.

The Julian Bream Trust has a new scholar - Saki Kato. Thérèse Wassily Saba interviewed Ms Kato and it is set to be published in the December 2019 issue of Gendai Guitar. They will be discussing Saki's lessons with Julian Bream in preparation for World Premiere of  "Streams and Variations" by the British composer Edward Cowie. The work is a newly commissioned piece by The Julian Bream Trust.

Suki Kato is the newest Julian Bream Trust scholar and on the 21st of November 2019, she will be presenting a full programme at the Wigmore Hall including a newly commissioned piece by the trust. It will be the World Premiere of "Streams and Variations" by the British composer Edward Cowie. Here is a link to The Julian Bream Trust -Saki Kato. Thérèse Wassily Saba also wrote a great piece on her wonderful site - International Classical Guitar.

Organized by Antigoni Goni, director of the classical guitar department of the Flemish Royal Conservatory.  A weekend of masterclasses and concerts. Laura Snowden, Royal Academy Professor Michael Lewin, British musicologist Graham Wade, and Italian virtuoso Andrea Dieci will be joining the KCB staff and students. There will be new works presented that were either dedicated to or commissioned by Julian Bream.  Here is a link: Julian Bream Festival

Classical Guitar Magazine
The magazine recently mentioned this site, www.julianbreamguitar.com, on their digital issue for July 15, 2018.
On the occasion of Julian Bream's birthday, the magazine reprinted a 2014 article on Julian Bream by Thérèse Wassily Saba. The magazine editor, Blair Jackson, mentioned this site in association with the article and birthday wishes for the maestro. Mr Jackson referred to www.julianbreamguitar.com as a "wonderful fan site"!!!
The printed issue that came later contains another Julian Bream article, again by Thérèse Wassily Saba.
Here is a link: Happy 85th Birthday Julian Bream!